Feta is a delicious Greek cheese that the majority of people love the taste and texture of. Whether you’re a fan of feta cheese or have just started to learn about its versatility, you should definitely try adding it to some of your favorite dishes.

What if you don’t have some feta cheese handy, though? Can you find a substitute? The answer is yes. There are many substitutes that work wonderfully.

In this article, you’ll get to pick out the perfect alternative and maybe add it to your favorite meal.

What Is Feta Cheese?

Thought to have been the food of the Greek gods, feta has since gained its name as the oldest and most popular cheese in Greece. It even had the honor of being mentioned in Homer’s Odyssey.

That said, a lot of work goes into making feta. It’s typically made from sheep’s milk, although goat’s milk is mixed in sometimes as well. It is then left in a brine solution for six months.

After this process, the cheese ends up packed with a tangy, salty, and distinctive flavor profile. Not only that, but feta is pretty good for you too. Despite its sodium levels, it’s rich in vitamin A, B, and K, along with healthy minerals such as iron and calcium.

If you’re not a fan of feta, however, you’ll find that there’s an endless sea of cheeses out there that are great substitutes.

Below, we’ll go through our top ten picks so that you’re able to find an alternative that you can use in your recipes instead.

We kick off the list with ricotta since it’s the closest cheese that resembles feta in terms of taste and texture. On the plus side, ricotta has significantly less sodium than feta cheese and contains about the same nutrients.

It is an excellent substitute for feta owing to the fact that it has most of the cheese’s advantages minus the salty taste. So, if you’re looking for soft, sweet cheese, go for ricotta.

High-grade halloumi makes a low squeaking sound when you cut into it. Try it! It is made from a mixture of both goat and sheep milk and is brined in a mild solution similar to the one used for feta cheese.

This makes halloumi just as rich and salty as feta. The one difference between them is texture. Halloumi cheese is heavier on the fat side, which means it doesn’t melt as fast. This makes it a perfect cheese for grilling and frying.

Feta is often made with 30% goat’s milk. This makes goat cheese quite a decent alternative. Goat cheese has a firm, oily texture and has higher calories.

Additionally, it needs to be stored in an airtight container to trap moisture. Otherwise, the cheese dries up. So, depending on what the recipe calls for, goat cheese may be a great substitute.

Queso fresco is a type of Mexican cheese that means literally ‘fresh cheese.’ That’s mainly because it’s traditionally made from raw milk.

It’s a more mild and creamier feta cheese substitute. Queso fresco doesn’t have the same salty flavor or crumby texture as feta, but it’s a rich, silky cheese with fewer calories and it melts easily on top of pizzas, pasta, or Mexican Corn on the Cob.

Another great option is cotija. It’s made from cow milk too, only it has a more pungent smell than both queso fresco and feta.

Cotija is also quite difficult to melt, so the cheese may not be suitable to replace in dishes where that is the desired texture.

This is due to the fact that cotija is pretty firm and crumbles fairly easily. This makes it a perfect cheese for dry or cold foods, such as salads and sandwiches. Additionally, cotija’s flavor profile bears a close resemblance to both feta and parmesan cheese.

Mozzarella cheese is probably one of Italy’s finest gifts to the world. Mozzarella has incredible moisture and a sweet, creamy taste.

This makes mozzarella a delicious swap. It contains less sodium and fat than which means it’s a healthier alternative. Easily swap out the feta for mozzarella in deep-dish recipes or ones where you want that smooth, melted texture.

Cottage cheese is the healthiest kind of cheese out there. It’s packed with rich muscle-building proteins and contains the lowest amounts of salt, fat, and calories. Add to that its crisp, firm texture, and you’ve got a decent feta cheese substitute.

It can be easily swapped for cottage cheese in both sweet and savory dishes. From cottage cheese cake to burgers and lasagna, this is an extremely versatile replacement!

Tofu will be a popular choice with vegans reading this. I bet you didn’t know this protein-packed treat can be a substitute, did you?

Tofu has all the benefits of feta just without any animal products. It’s made from fresh soy and can be repeatedly fermented to get the same flavors found in feta cheese. As an added benefit, tofu contains no saturated fats and is low on calorie content.

Greece blessed us with another flavorful cheese called the mizithra. Mizithra is also made from goat and sheep’s milk. Depending on its age and how it was brined, the taste of mizithra will differ.

There’s a mild version and a sweeter, softer one. Either way, it melts at the same heating point as feta and they both share that wonderfully crumbly texture.

Cheddar may sound like an odd feta cheese substitute, but trust us, it’s guaranteed to boost the flavors of any meal. That’s mainly because cheddar pairs well with meats, vegetables, and carb-loaded dishes.

The taste of cheddar is a bit on the mild side when compared to feta since it doesn’t contain as much salt. However, what it lacks in sodium, it makes up for in sweetness.

Now that you’ve most likely decided on a good feta cheese substitute, let’s go through three simple recipes where you can try it out. We enjoy it on Egg Toast Pizza, Leftover Chicken Stuffed Avocados, Spinach Tomato Quiche, Easy Pasta Salad and Rainbow Chickpea Salad. We can’t get enough of the Grilled Beer Corn on the Cob that has the sprinkles on top after removing from the grill.

It is made from sheep’s and/or goat’s milk, unlike most cheeses that contain just cow’s milk. This gives feta a creamier texture. It also makes it healthier since it has high levels of calcium, phosphorus, iron, and vitamin B.

Is Greek Cheese the Same as Feta Cheese?

Greek cheese is feta that’s made traditionally from sheep’s milk and brined in a flavorful solution to give it that tangy, salty taste. Locally produced feta cheese, on the other hand, is often made from cow’s milk and then ultrafiltered—which is not the same.

What makes this cheese so special is its crumbly texture and salty yet tangy taste. Packed with healthy nutrients and delicious flavors, it’s quite hard to imagine another cheese that can easily replace it.

Luckily, though, the Greek and the French have our backs. They’ve introduced the world to a plethora of cheeses, out of which we’ve picked the ten closest to feta.

Choose your substitute now and start trying it out in your favorite salads and dishes! 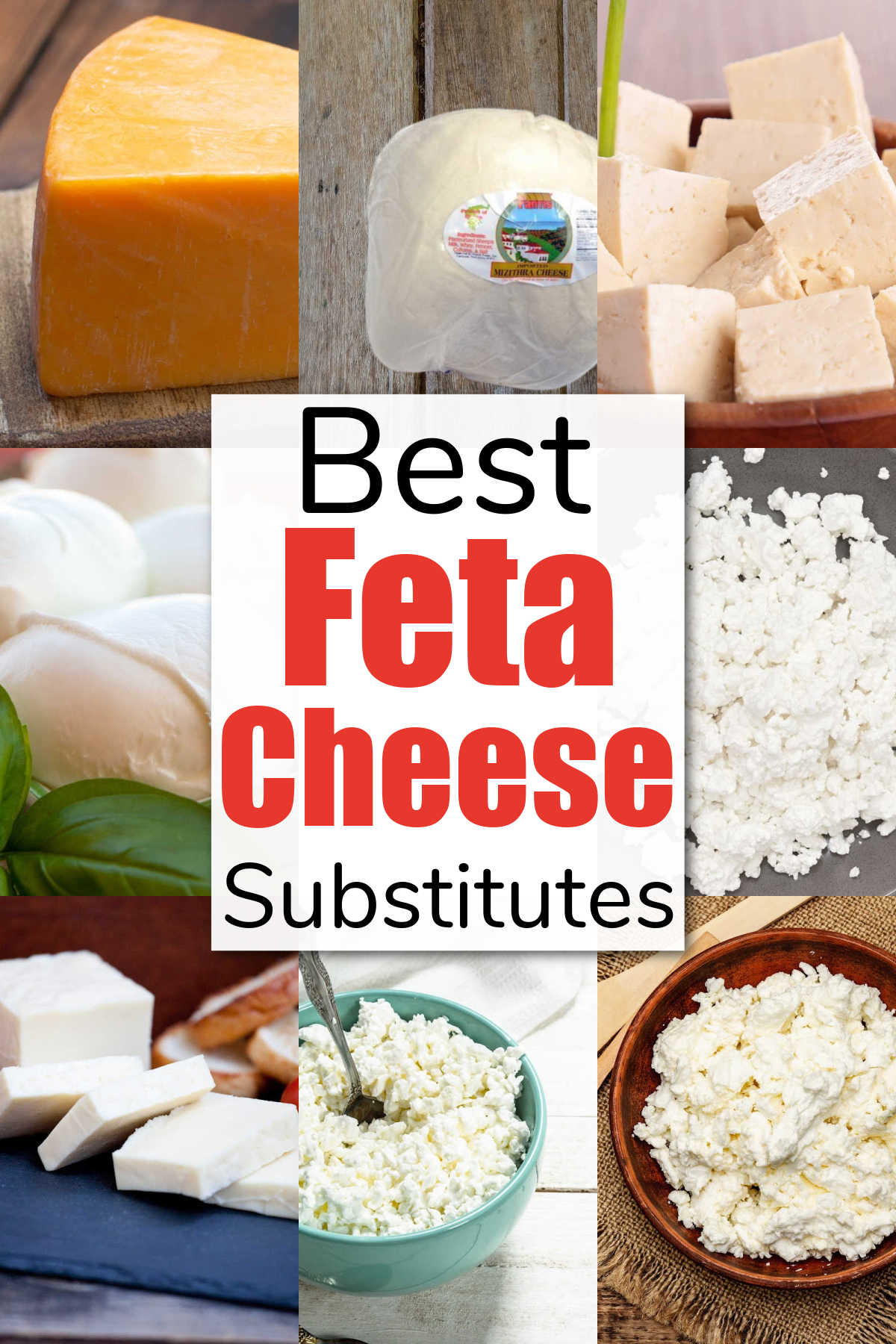 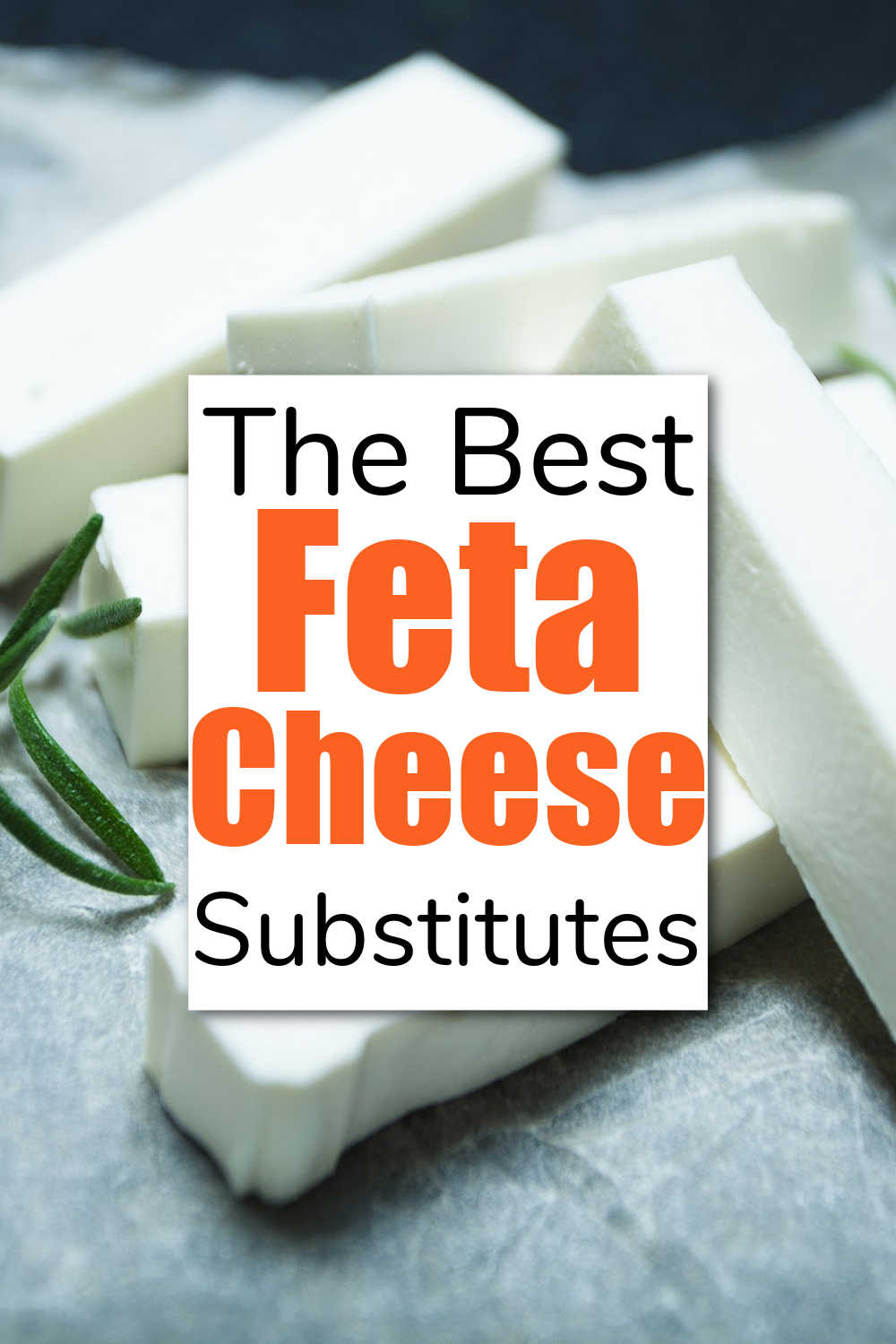