Five Spice is a widely popular cooking ingredient in Asian cuisine. It’s used to make a variety of marinades, rubs, and sauces. Also called Chinese powder, it gives your meals that perfect balance of sour, salty, sweet, savory, and bitter flavors. As such, finding a spot-on Five Spice substitute for this mixture can be tricky – but we’ll make it easy!

This is why I’ve put together today’s list of the best alternatives to help you easily replace Chinese Five Spice in your recipes when you run out.

Here’s a quick breakdown of the substitutes and their conversion rates:

What is Five Spice?

Heavily featured in Chinese, Taiwanese, and Vietnamese dishes, this is made by mixing five different types of spices. These are cinnamon, star anise, cloves, Sichuan peppercorn, and fennel seeds.

The result is a concoction with a powerful, unique, and delicious flavor that goes well with chicken, meat, and seafood. It can even add a tasty kick to desserts!

If you have allspice sitting in your spice cabinet, you can whip it out to use as a solid substitute in recipes. It’s commonly used in Middle Eastern, Latin, and Caribbean cuisines.

With dried berries as its main ingredient (Pimenta dioica), this substitute offers a sweetness that reminds me of cinnamon, nutmeg, cloves, and pepper all at the same time.

You can use allspice for pretty much any type of dish including marinades, soups, meat, desserts, stews, and baked goods. It’s also quite strong, so make sure you don’t add too much at once.

Za’tar is a very popular herb and spices mixture used primarily in Middle Eastern and Mediterranean recipes. The exact ingredients will vary from one region to another, but it almost always contains thyme, oregano, sumac, and sesame seeds.

Its flavor is often described as somewhere between nutty and citrusy, a tad tangy and woodsy yet also a bit sweet.

This is why Za’atar complements rice, chicken, vegetables, and meat beautifully. It’s also a delicious addition to dips, soups, and dressings.

It is pretty intense, so start with a little then add more if needed after a taste. Generally, ⅓ tablespoon of Za’atar is equivalent to 1 tablespoon of Five Spice.

Baharat is another alternative that you will extensively find in Middle Eastern and Mediterranean cuisine. The word ”baharat” is Arabic for spices, and there’s rarely a household in these regions that don’t use this mixture in their daily cooking.

Thanks to its rich, earthy, smoky, and sweet flavor, Baharat is one of the best seasonings you can use whether you’re preparing meat, chicken, fish, rice, or vegetable stews.

It is generally strong, so you can add it just like you normally do Chinese powder.

With a flavor as unique as its appearance, Star anise comes from the fruit of Illicium verum – a Chinese / Vietnamese evergreen tree. It gets its name from its pods that look like a star, and you can use it as is or in a powdered version.

Many people confuse star anise with anise because they share similar names and tastes, but the two spices aren’t even related!

Star anise is popular due to its unique flavor that couples well with meats, stews, poultry, soups, and baked desserts. It also possesses anti-viral, anti-bacterial, anti-fungal properties, so it can be beneficial for your health.

Remember, if you’re using star anise pods whole, you need to take them out from the cooking pot before serving.

Warm, sweet, and spicy, star anise is as powerful as Five Spice so you can add it in equal amounts.

Often regarded as the Asian version of Seven Spice, Garam Masala is heavily used in Indian dishes. It adds a rich sweet and spicy flavor to meals, with a hint of heat that doesn’t overwhelm the taste buds.

Used in a wide range of dishes from soups to curries, Garam Masala typically features cumin, nutmeg, cinnamon, coriander, black pepper, cardamom, and caraway. As you can see, it’s quite similar to Baharat.

You can use Garam Masala on its own or mix it with coconut milk, water, or vinegar. Start with a small amount and taste before you add more.

For every tablespoon of Five Spice, use half the amount of Garam Masala.

Since you can use star anise and Garam Masala on their own as alternatives, why not combine them to get an even closer flavor?

That’s right, grind a few star anise pods and mix them into your Garam Masala to enjoy the best of both worlds. This blend can be a bit intense though, so add about a quarter less than you usually add with Five Spice.

Fennel seeds and Sichuan pepper (also known as Chinese pepper and Chinese prickly ash) have a bitter, sweet flavor with a tinge of hotness that’ll remind you of Five Spice despite having a somewhat different vibe.

Ras El Hanout is commonly used in North African cuisine, mainly in Morocco, Algeria, and Tunisia. Its name is Arabic for “head of the shop”, which refers to mixing the very best spices offered by the shop.

This blend of spices is one of the most varying as each family, brand, or region may use different ingredients (up to 30) to make their version. That said, most of them start with turmeric, pepper, anise, cinnamon, ginger, cumin, coriander, and cardamom.

Thanks to the overall woody, sweet, spicy, and bitter flavor of Ras El Hanout, you can use it instead of Five Spice in half the normal amount.

You can use cinnamon sticks and dill weed to mimic the flavor of Five Spice, but there’s some effort that goes into it.

For one, fresh dill weed will turn limp if added directly to the recipe, so you’ll have to chop it first then gradually throw in about half the amount you’d use of Five Spice.

After you get the warm, anise-like flavor from dill weed, you can add 1 or 2 cinnamon sticks to the pot for an earthy kick.

Last but not least, you can boost the sweetness and spiciness of star anise by mixing it with cinnamon to complement its distinct fennel/clove-like taste.

Is Five Spice and Garam Masala the Same Thing?

No, they aren’t the same thing and they don’t taste exactly the same. They do, however, share several ingredients such as cinnamon, cloves, and fennel seeds.

Can You Use Allspice Instead of Five Spice?

Yes, you surely can! In fact, it’s the first substitute on our list.

No, Five Spice isn’t hot. Thanks to the cinnamon and anise, it’s warm and sweet. Yet it’s also rich and cool thanks to the cloves and fennel seeds.

How Should You Store Spices?

Generally, you should keep all your spices in air-tight containers and place them somewhere cool, dry, and away from direct sunlight.

As you can tell by now, there are many excellent alternatives that can give you that unique blend of salty, sweet, savory, and bitter. From here, finding your perfect substitute is simply a matter of experimenting! 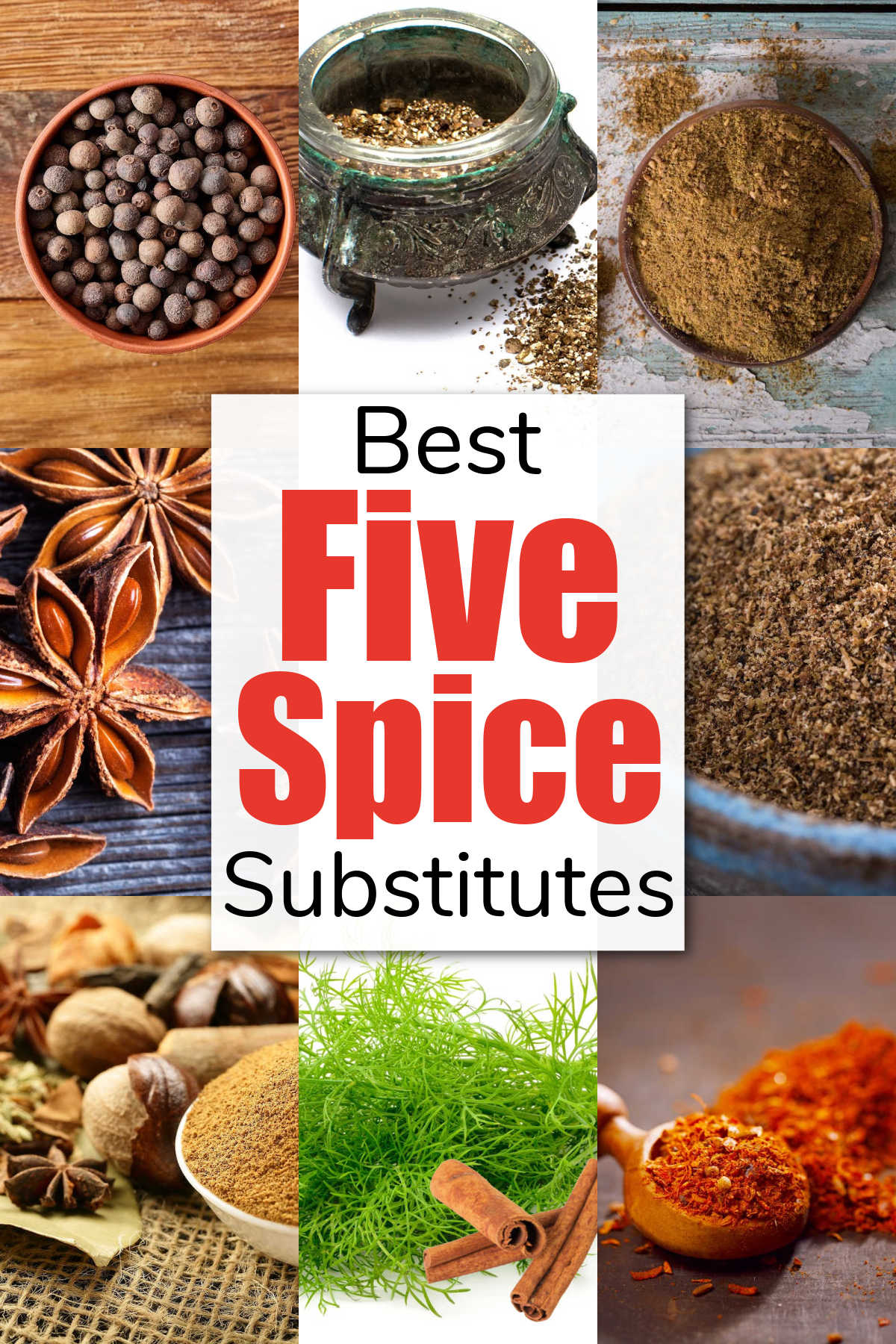 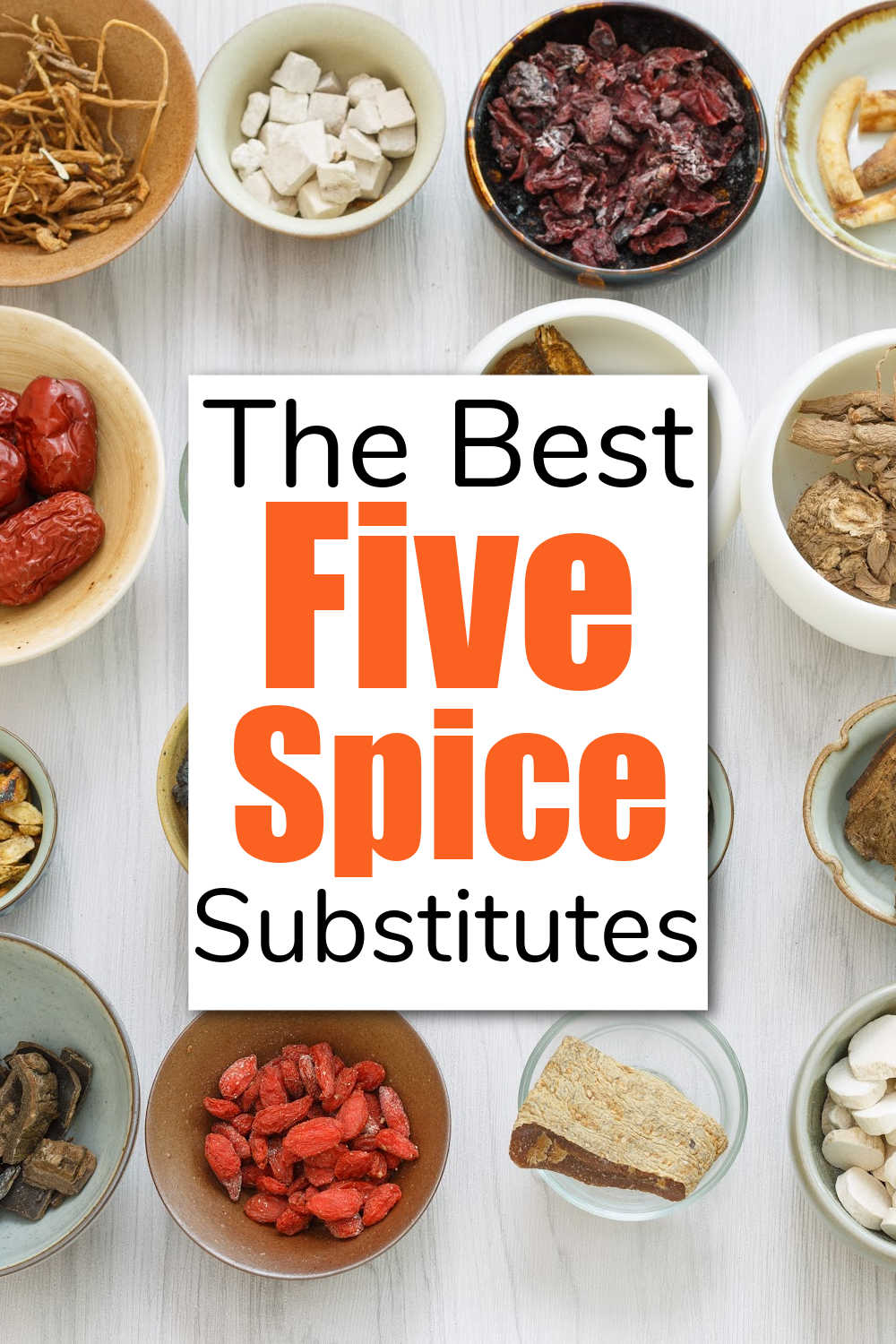