Green chiles are spicy, and tasty. They add an intense bite to any dish, and they’re a staple in many styles of cooking. These Green Chiles Substitutes allow you to pack in all the flavor even when you don’t have access or the grocery store has run out.

What if you can’t get green chiles?

They may not grow in your area. Or, you might have them, but you don’t like the taste. Is there a suitable substitute for green chiles?

The answer is a fat yes. There isn’t only one alternative for green chilies, but my list here has nine equally delicious substitutes.

What are Green Chiles?

Green chiles are a generic term that identifies young, green capsicum peppers that typically fairly mild. As the pepper ages on the plant, it will typically become hotter. So, the canned green chiles you typically see in the stores are younger and more mild varieties. It is a great way to get that fantastic peppery taste without the scorching heat!

You might be used to seeing these in the stores in small cans like you see below, but they are also sold in the produce section of the grocery store.

Overview of Top 12 Substitutes, Amount of Heat and Conversion Rate

Here’s a rundown of the substitutes for green chiles.

It is easy to make a replacement for the canned green chiles. The canned varieties are typically Anaheim or Hatch peppers, so I recommend starting with those.

Cut the peppers in half and remove the stems and seeds. Place them on a parchment paper lined baking sheet and roast at 450 degrees for 10 – 15 minutes or until you see the skins start to blister.

Remove them and let them cool slightly. You’ll be able to easily peel off the skins at this point.

Once the skins are removed, chop them and use in your recipe.

If I have the time, I much prefer to add the peppers to the grill. On a medium-high grill, add the whole peppers straight to the grill grate. Let them cook for 5 – 7 minutes and turn them over.

The skin should look slightly charred. Once both sides are charred, remove them.

Cut off the stem and deseed them. Cut in half and peel away the skin. Chop and use in your recipe.

Bell peppers are the easiest to find in the grocery store, and odds are you already have some in your refrigerator. You may also have some pre-cut ones from the freezer section. That makes them easy to access and pretty inexpensive.

The drawback is that the flavor is much “grassier” than traditional green chiles. Additionally, they have no capsaicin, which means their Scoville unit is zero. These are great to use in a pinch, but they have a distinctively different flavor from green chiles.

Anaheim peppers are extremely mild and easy to prepare. They can be fried, roasted, and grilled. You can even eat them raw without burning your mouth. They make for a good alternative to green chiles because they can be added liberally to virtually any dish.

Another good thing about Anaheim is that it’s on the milder half of the scale. If you don’t want the kind of heat that Serranos and jalapeños add to food, the Anaheim is the perfect choice. It’s closer to bell peppers in terms of taste.

These peppers are longer and more triangular and easy to identify in the grocery stores.

Poblano pepper is far more mild than jalapeños, and are a great substitute for other green chiles.

You can use poblano for most recipes that require green chiles. You can even stuff it and fry it. However, poblano is best used in small amounts to spice up your recipe.

The skin has a bit of a waxy texture. I typically broil or roast the pepper for a few minutes until the skin blisters. It is easy to peel the pepper afterwards, and that eliminates that waxy feeling.

Most grocery stores carry this in their produce department.

You’ll find Hatch peppers are one of the more mild varieties of capsicum, with a fairly low Scoville heat rating. These are often found in the Hispanic food canned section.

These are only grown in the Hatch Valley in New Mexico and are typically found fresh in the late summer months. If you can find them fresh, grab them. They taste best when roasted!

Jalapeño peppers are strikingly hotter than green chiles. They’ll get your tongue burning, and they add a distinctive, spicy taste to your plate. If you’re looking for more heat, you can go for jalapeños instead of green chiles.

It’s worth noting, though, that jalapeño can alter the taste of your dish. So, it’s better to use it for seasoning for a bit of spice, not as an actual ingredient.

Note: For any of the hotter peppers, you can tame the heat by removing the seeds and the veins/membranes. Additionally, lightly roasting or sautéing the peppers causes the capsicum to break down and it will reduce the heat.

If you think jalapeños are the hottest peppers around, think again. Serrano peppers are five times as hot, and they’re not for the faint-hearted. If you want to find a hotter substitute than green chiles, you won’t find a better option than Serrano pepper.

However, you should use them in small amounts until you are used to the heat. They’re most famously used for guacamole and chicken dishes.

These are smaller that jalapeños and can be green if they are harvested early, or red, brown or orange when they are harvested later. You will find that this variety has a thicker flesh than may other varietals and work well as a substitute.

Red chilies are basically green chilies that haven’t been harvested. Most red peppers are originally green when they’re not mature yet. So, if you want a suitable substitute for green chilies, you can always go for red chilies instead.

Red chilies are equally as tasty, and they pack a lot of nutritional benefits. You can use them to make any dish that requires green chilies.

All that said, red chilies are significantly hotter than green chilies because they’re more mature. So, you may want to watch the amounts you add to the food.

Cayenne peppers are available on the market in both dry and fresh forms. Depending on your taste in food, you can use either. They’re a good alternative to green chiles and have a very high heat level.

It’s worth noting, though, that cayenne is hotter than jalapeño pepper. So, you may want to watch how much you add to your food.

Generally, you should only choose this if you’re making an extra hot dish.

These are typically thin and pointed and are usually red in the grocery store. It is not uncommon to find green cayenne peppers, and they are usually the peppers that were picked early.

Habanero peppers are the hottest on my list. It’s only for champs who aren’t afraid of some spice. But I’m warning you, they can alter the taste of your dish significantly, thanks to their intense spicy flavor.

You should only choose habanero if you’re making an extra hot dish, and green chiles are not hot enough for you.

Habaneros are often used in hot sauces, but you can always get a little creative when substituting. Definitely err on the conservative side, though! A little goes a long way.

Red pepper flakes are a nice alternative to green chiles if your goal is to get hot seasoning. They can be used on salads, sauces, salsas, and all kinds of foods.

Red pepper flakes are often a blend of different types of peppers. They’re mostly from the capsicum annum family, including jalapeños, Anaheims, and bell peppers.

These flakes have a medium heat level because they contain some mild chiles. So, you can use them without being afraid they’d dominate the taste.

For each green chile replacement, add one teaspoon of the flakes, and it should have the same effect on the taste.

Chili powder is one of the best substitutes for green chiles because it gives a moderately spicy taste. Plus, it tastes a bit smoky, so it adds another layer of complexity to your food. You can use it for cooking dishes, to make sauces, or even to season salads. It’s aromatic and easy to find.

You can choose the level of heat you prefer with chili powder. Brands that add cayenne pepper are often hotter.

For each green chile you’d add to your recipe, replace it with only half a teaspoon of chili powder. Powders are often a lot more intense than fresh peppers.

Homemade Salsa – This recipe only takes 10 minutes, and is perfect for trying out different peppers, especially for the extra heat!

Homemade Black Beans – This is another one where replacing with a hotter pepper works well. The black beans are extremely flexible and do great with a bit of extra heat.

Stuffed Peppers – This is a vegetarian recipe and takes just 45 minutes to whip up. Just because it is vegetarian doesn’t mean it can’t be hot and spicy!

Air Fryer Chicken Enchiladas – This is another fast recipe that works well with substituting the chiles. Best of all, you make it in the air fryer, which means it WILL be fast!

Is it Spelled Chili or Chile?

Chile with the “e” references the capsicum peppers. Chili with an “i” references that nice big pot of beans and meat. You’ll see the spellings used indiscriminately, but it should technically be “chile” when referring to the peppers.

Can Red Chiles be substituted for green?

Yes! Expect that red chiles may be a bit hotter than the younger, green chiles, but the flavor will be robust and serve as an excellent substitute.

If you want to find a substitute for green chiles, you have a long list of options to choose from. Habanero, Serrano, and jalapeño peppers are the best substitutes for spicy dishes. Anaheim and poblano peppers are great replacements to get that peppery taste without the heat.

You can always go for chili powder or red pepper flakes in a pinch. 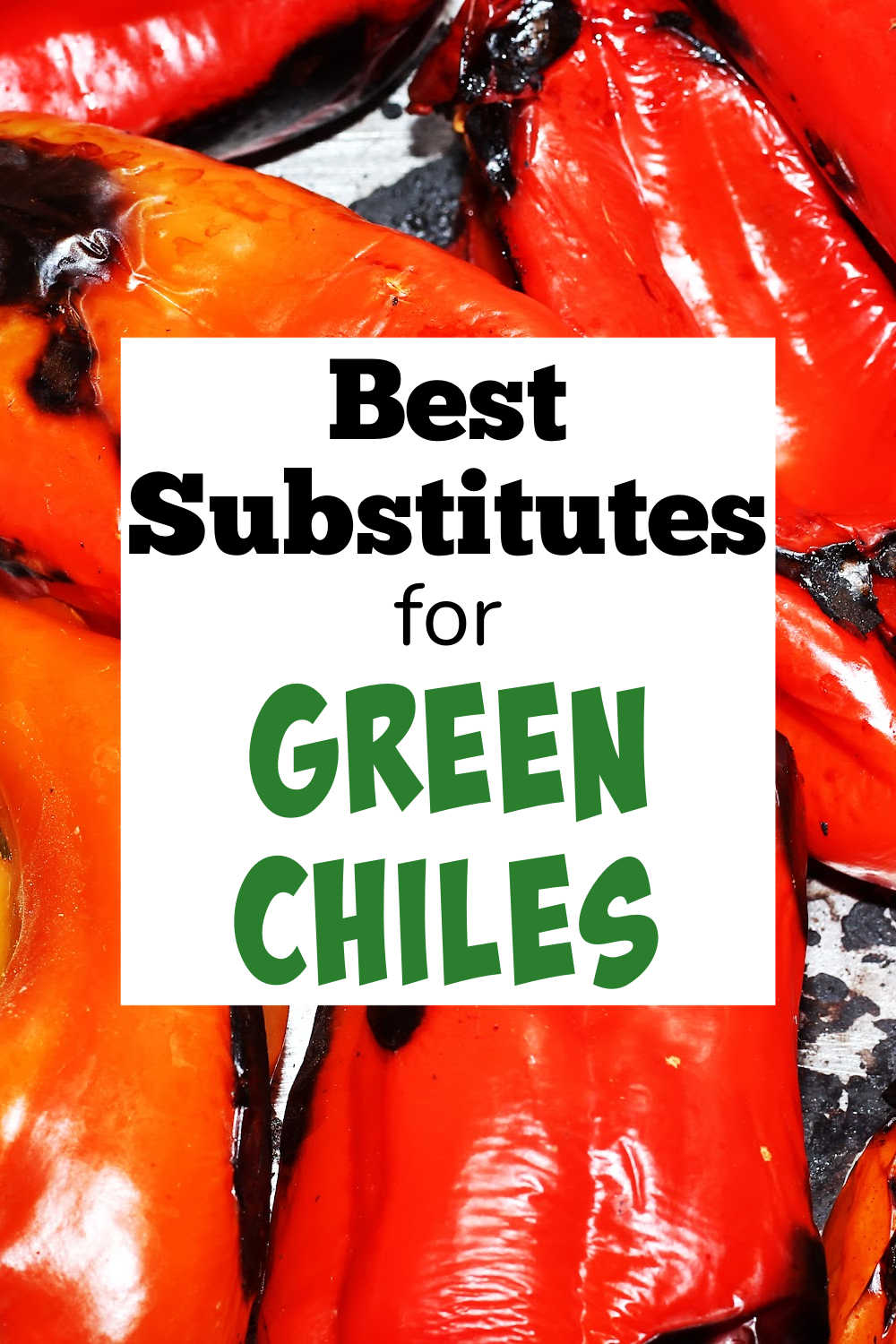 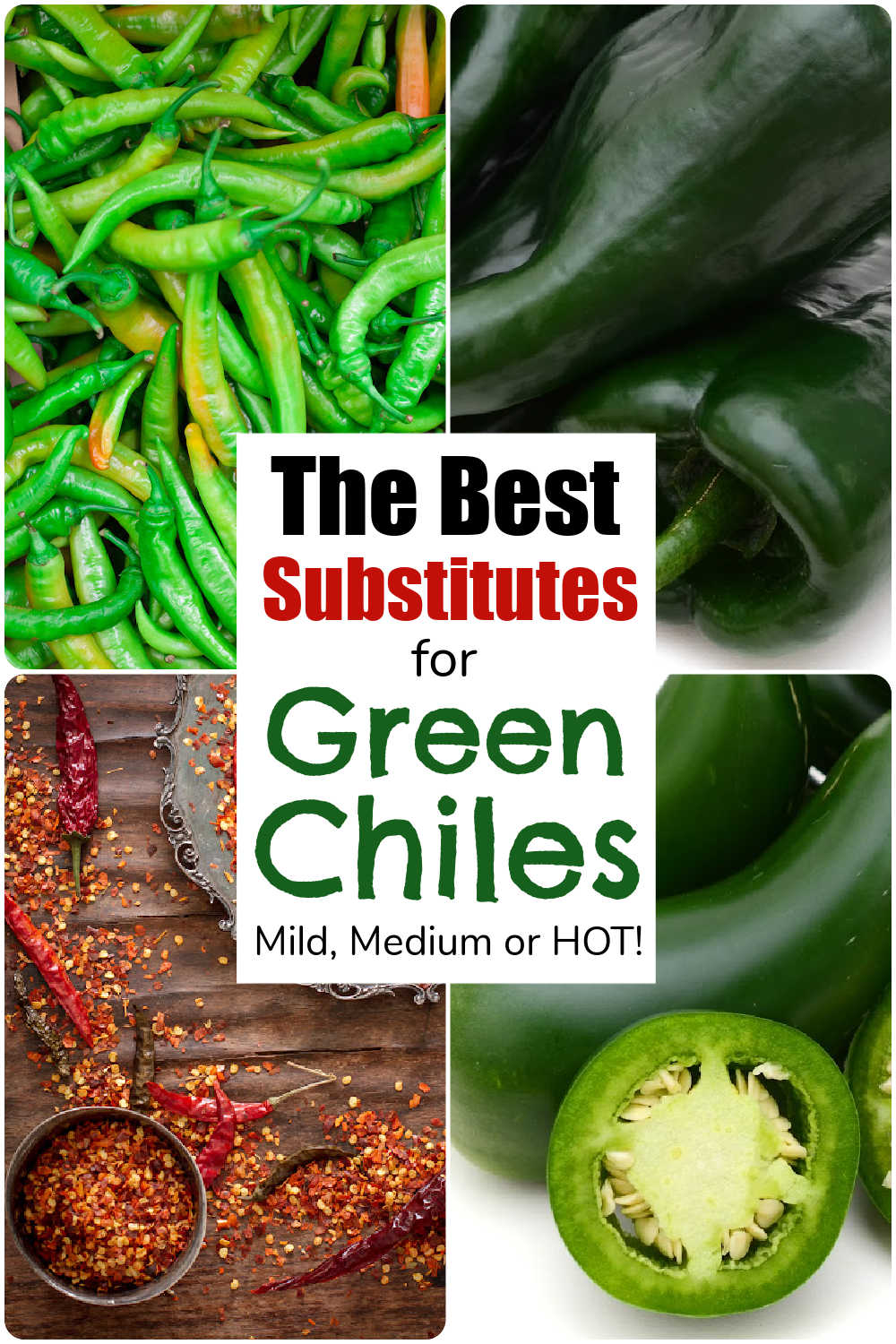