This is a list of the Best Almond Extract Substitutes to use in an array of desserts and pastries. Almond extract disperses a sweet and aromatic nutty flavor to a recipe. It goes fantastically with chocolate, maple, vanilla, coffee, and cherry desserts, as well as sweet stews and curries, but it is a pain when you run out!

While essential in some recipes, not all of us have almond extract sitting in our pantries. This is especially true for people who have nut allergies. So, if your recipe calls for almond extract, use the below almond extract substitutes instead.

Here are some of the best almond extract substitutes you can use if you don’t have the real deal on hand.

It is made of synthetic benzaldehyde instead of almonds, making it the perfect substitute for individuals with nut allergies. Just make sure the label reads that it is processed in a nut-free facility.

It tastes almost exactly like real deal. It doesn’t have the same punch as the pure variety, but it’s the next best thing if your recipe specifically calls for almond extract and nothing else. Plus, it’s often less expensive than the nut-based variety.

When using imitation almond extract, use a 1:1 ratio.

Vanilla extract is arguably the most common substitute for almond extract. Since it’s so popular, you likely have a small bottle sitting in your pantry right now.

When substituting vanilla extract, keep in mind that it has a stronger taste and fragrance, which is why it’s used in half-teaspoon increments in recipes.

As such, use a 1:1 ratio when replacing it with vanilla extract. Taste it to make sure it doesn’t need additional adjustments.

For best results, use vanilla extract made from real vanilla beans rather than the imitation kind made with vanillin. This is especially true for low-heat desserts such as pastry creams, puddings, no-bake treats, and icings, as the taste difference is much more noticeable.

Amaretto, which literally translates to “a little bitter” in Italian, is a sweet almond-flavored liqueur that’s usually made of bitter almonds, apricot kernels, or peach stones, all of which are natural sources of benzaldehyde. It’s often used in cocktails and desserts, especially in Italy where it’s most popular.

Amaretto is much thicker and sweeter than the average liqueur, so it’s rarely consumed on its own. Instead, it’s paired with other liqueurs to dilute the flavor.

In Italy and most other European countries, Amaretto is incorporated into smoothies, frappes, sweet dessert sauces, and glazes for savory dishes as it adds a bit of kick to a recipe. And since alcohol evaporates when cooked, it’s perfectly safe to use in desserts that children will eat.

Amaretto is not as concentrated as almond extract. So when substituting almond extract with Amaretto, use four to eight times as much to match the flavor required in the recipe. As always, start with less and taste it to see if it needs more.

Note: Amaretto syrup is a non-alcoholic version that is often used in specialty coffees and can be used as an extremely good substitute.

When you think of extract substitutes, cinnamon isn’t usually the first to come to mind. After all, cinnamon and almond have distinctly different flavor profiles. However, it does add a similar spicy, nutty aroma you’d find in almond extract.

If you’re a fan of cinnamon, you already know it pairs well with a lot of different flavors. It adds a sweet and woodsy aroma to chocolate and nut-based desserts and works equally well in savory dishes.

When using cinnamon as a substitute, use half a teaspoon of cinnamon for every two drops of almond extract. Gradually add more as required.

Although they come from two different families, cherry and almond both produce the distinct flavor of benzaldehyde, so they taste fairly similar. In fact, some manufacturers use cherry pits alongside bitter almonds when making almond extracts. So, if you think almond extract tastes a bit like cherry and vice versa, it’s because they share almost the same flavor profile.

If you have maraschino cherry juice in your fridge, it’ll work as a substitute. For every part of extract required, use four parts of cherry juice. You can also use whole maraschino cherries, but it might significantly alter the texture and flavor of the recipe, so it’s best to stick with just the juice.

If you want to add a strong almond smell to your recipe, almond paste is your answer.

As the name suggests, almond paste is a dough-like paste made of almonds, almond extract, sugar, and thickening agents like glucose or corn syrup. It’s often used in cookies, tarts, cakes, and pastry fillers. It’s much like marzipan, except it’s courser and less sweet.

There’s no single ratio when substituting with almond paste. However, since it has a distinct semi-bitter taste, it’s best used in minimal amounts. Start with half a teaspoon and gradually increase until you reach the desired taste.

Like imitation almond extract, almond essence is almost always safe to use when you have nut allergies. I say “almost always” because some manufacturers use real almonds alongside the synthetic ingredients, so always double-check the label to make sure it isn’t hazardous to your health.

It shouldn’t contain anything related to natural almond, and instead has the label, “artificial flavor” or “imitation almond flavoring.”

Almond essence is sharper and much stronger in taste and smell than extract. Some brands can even be up to four times stronger. So, use almond essence several drops at a time until you reach the desired flavor.

Walnut extract adds a rich, nutty flavor to your baking. It’s a bit more nutty and bitter than almond version, but it should alter the taste of your recipe as long as it’s used in minimal amounts.

Walnut extract is especially suitable for chocolate-based recipes, as it imparts a deeper and stronger flavor. It’s also a great addition to nut-based recipes as it enhances the nutty flavor.

Use a 1:1 ratio when replacing almond extract with walnut extract. Since it’s slightly more bitter than the real deal, you might want to increase the sugar content of your recipe a little.

If you’re preparing a fruit-based dessert that requires almond extract but don’t have it to hand, use orange zest instead.

Orange zest adds a citrusy, tangy flavor to recipes, giving it an extra depth of flavor. It’ll likely alter the end result of your dish as it doesn’t taste like almonds at all, but the difference in taste is almost always a welcome one.

For every two to three drops of almond extract required, replace it with about a teaspoon of orange zest.

Like walnut extract, hazelnut extract provides a similar aroma and nutty flavor. For this reason, it works particularly well in baked desserts and dishes, such as cookies, muffins, and cakes.

To replace almond extract with hazelnut extract, use a 1:1 substitution.

How to Make Almond Extract at Home

If you have a bit of time in your hands, consider making your own almond extract at home like we did with our Vanilla Extract.

Almond extract is made from three primary ingredients: almond oil, alcohol, and water. These ingredients are easily sourced in most stores, but for best results, we recommend using real almonds instead of almond oil.

And there you have it, you’ve made your own almond extract! If properly stored, your homemade almond extract will last you up to a year. Remember: alcohol burns off when you cook it, so your children can safely eat desserts and treats made with almond extract.

There are so many cooking exchanges to use just by using what you have in your pantry right now. Before running to the store, check to see what you have. 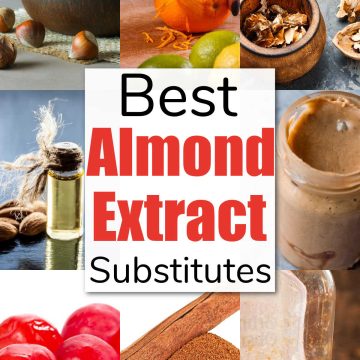 How to Make Homemade Almond Extract

High Quality Vodka: Make sure to use 80% or higher vodka to pull the best almond flavor out.  Sealed Jar: Make Sure to have a jar that is sealed well so you can shake it ever few days.  Almond Choice: Use all natural almonds
Tried this recipe?Mention @savorandsavvy or tag #savorandsavvy! 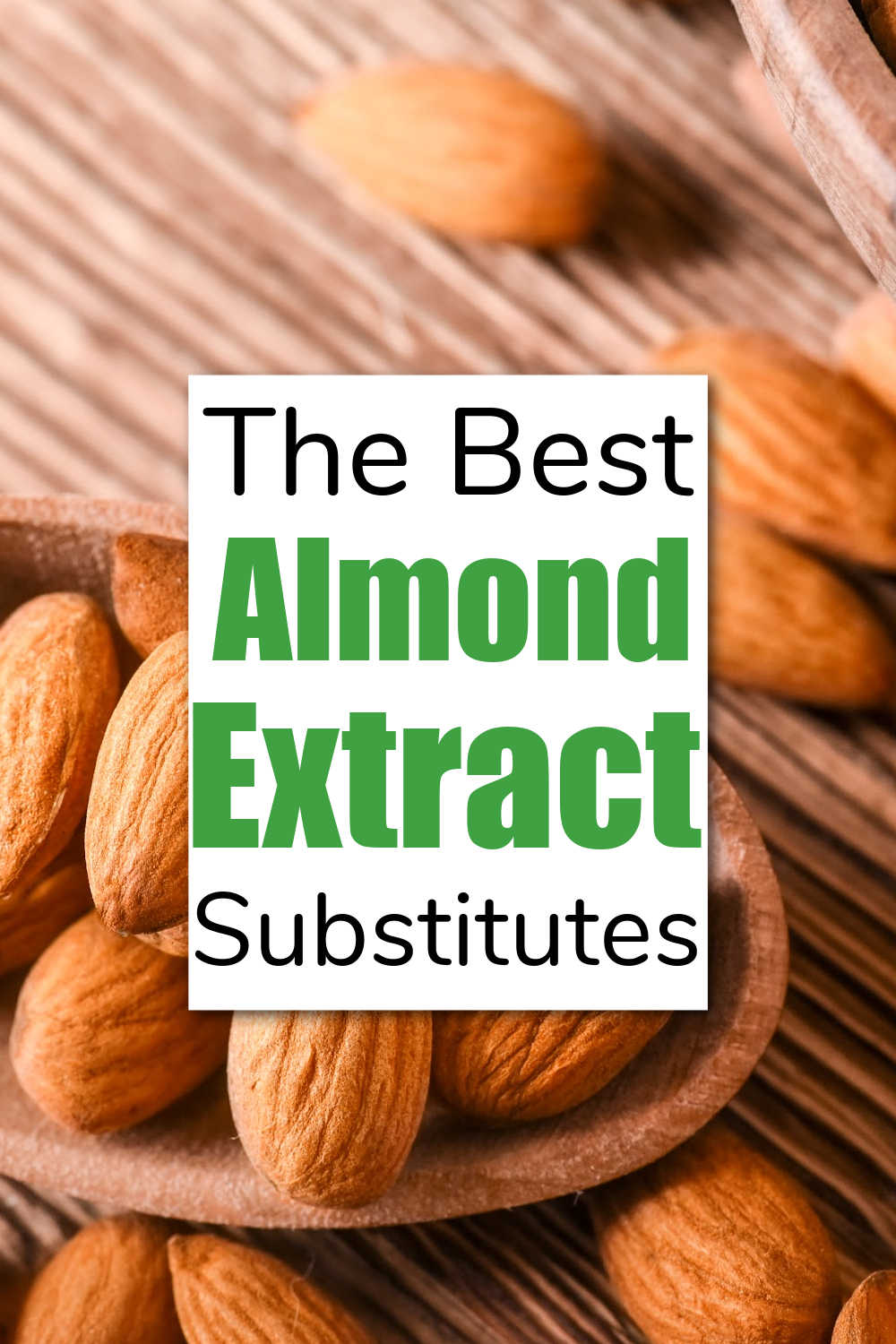 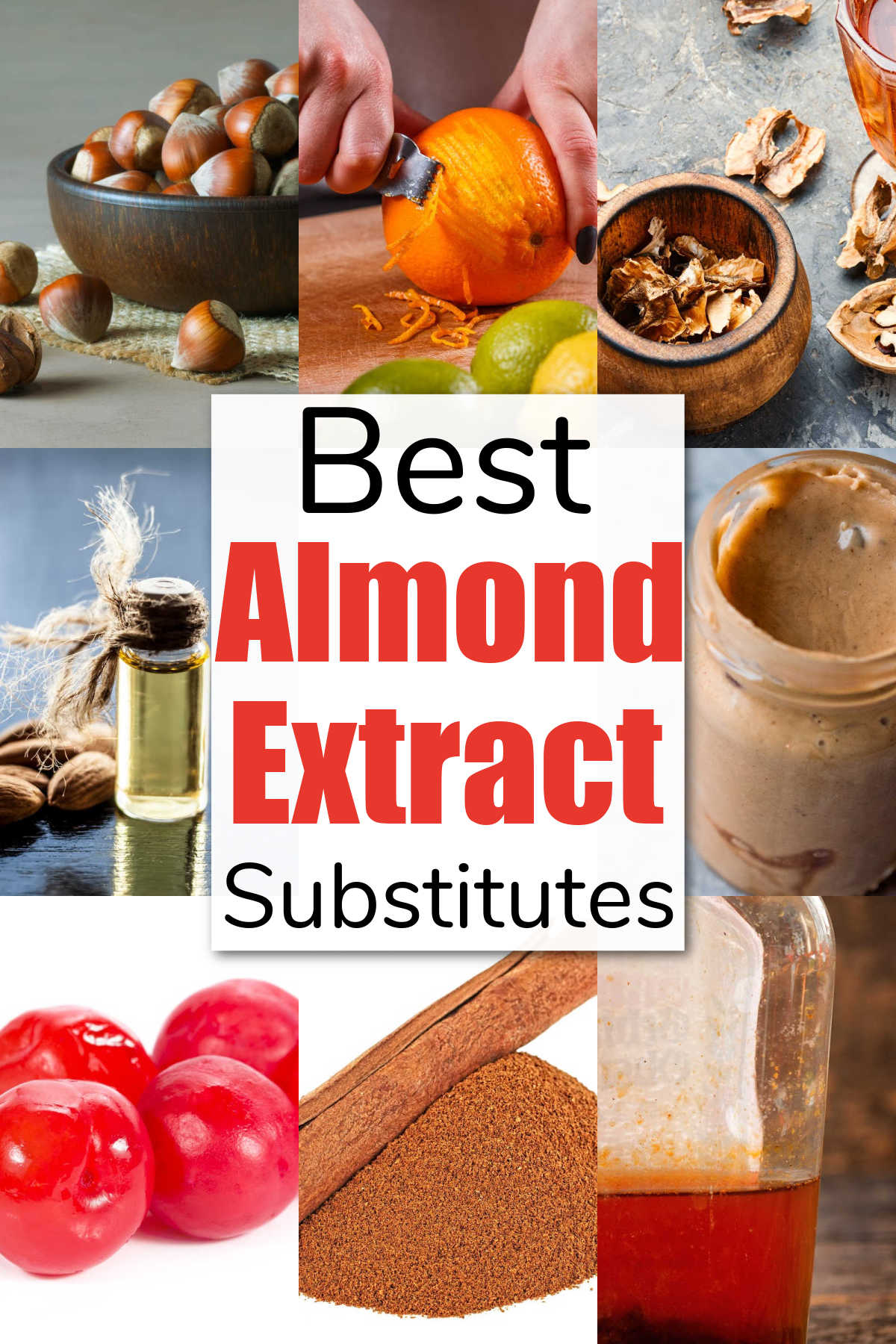