Parsley is used in a wide variety of food recipes. You can use it for stew, soups, salads, casseroles, and I can go on and on. So, what to do when it doesn’t grow in your area or when you don’t have it at hand? Look for the best Parsley Substitute, of course!

That’s easy. There are a bunch of parsley substitutes available for your recipe ingredients. They may not give the exact same taste, but they’ll give you some very close alternatives and you won’t need to rush to the store or ditch your recipe.

Given the different flavor profile of each replacement for parsley, you are sure to find one that will match up perfectly.

Typically, recipes call for fresh parsley, but you can easily use dried. The key to remember is:

One Tablespoon of Fresh Parsley = One Teaspoon of Dried Parsley

I do recommend keeping dried parsley on hand. It isn’t always economical to run to the store and pick up a bunch when you only need a little for a recipe.

Tip: Buy a large container of dried parsley. If you look at the price per ounce of the small bottles (next to the salt and pepper in the spices aisle) you find in the grocery store, you will be shocked! Buying in a larger container lasts a lot longer, and is much less expensive per serving.

Curly Leaf – Curly leaf parsley is most commonly used as a garnish. It has a mild flavor that is used extensively in cooking.

Flat Leaf – Flat leaf parsley is more commonly used for cooking and less for garnish. It has a stronger flavor, so make sure you portion it accordingly.

You may also find a Japanese Parsley, Italian Parsley and a Hamburg Parsley. While these are fun to grow and use, you will seldom find them in the grocery stores. Look for root parsley when cooking in eastern, central and Southern Europe.

If you have the option, it is much less expensive to grow your own. These are biennials. The first year it will grow into a plant, and will go to seed after the first winter. The good news is that they reseed prolifically, and you’ll have a lot of volunteers if you don’t cut back the flower stalks.

Most people throw away celery leaves after using the stalks in recipes, but you really shouldn’t!

Celery leaves can be put to good use in many dishes. They serve as an excellent substitute for parsley because of their intense flavor. After you chop the stalks, wrap the leaves in a damp paper towel and place in a Ziploc bag in the refrigerator. It will last several days.

You can use celery instead of parsley in foods like stews, soups, and sauces.

If you want to make a salad or use parsley for garnishing, you can use the inner leaves of celery. They’re softer than the outer ones, but they have an equally strong flavor.

Chives are thin with tall green stalks. They come from the same family as onions, but they have a much different taste, being fresh and crisp.

Although chives don’t taste exactly the same as parsley, they have a similar flavor profile that’ll work for most recipes. These small greens have a mild taste with a bite, but their leaves have a brilliant green color that’ll have the same effect on your food as parsley.

You can use both dried and fresh chives for your recipes. They’re natural antioxidants, which is a bonus. Traditional chives have pink blossoms, but there is another variety called garlic chives. These have white blossoms, flat leaves, and (surprise!) tastes a lot like garlic. Give these a shot for a fun twist!

This is another perennial that is extremely easy to grow. If you have the ability to grow them, it will save you a lot of money in the long run.

You can use arugula instead of parsley for garnishing or cooking. It’s originally a salad green, thanks to its large green leaves and high nutritional value. However, many people also use it as a garnish because it both looks and tastes good.

Arugula works as a substitute for parsley because of its peppery taste. You won’t notice much difference in the end. That said, its leaves are much larger than parsley, so you’ll want to chop them if you want the same effect.

These are commonly found in the produce department, and some stores are even bagging these in clear, plastic bags now for your convenience.

Endive is bitter-tasting, leafy, and a salad green. So, it can work perfectly well as a substitute for parsley because it has the same properties. Most people use it in its raw form, particularly in salads. However, you can grill it, roast it, or even braise it in your recipes.

There are three primary types of endive you’ll find at the store:

It’s worth noting, though, that these varieties have more robust flavor than parsley counterpart. So, when using it, make sure to use a bit less than what you’d use if you were using parsley.

Cilantro is the most popular parsley substitute, even though it has more of a citrus flavor. Nevertheless, it serves as a good substitute because it looks similar to parsley and is a very close replacement.

It has an intense flavor which may overwhelm recipes if you don’t use it sparingly. You will find this herb most commonly used in Mexican or Thai dishes because of its potent flavors.

Note: Some people HATE cilantro, noting that it tastes like soap. Believe it or not, this is typically a genetic issue with the OR6A2 olfactory receptor genes, so you can blame your parents! If you do think it tastes soapy, just skip this substitute.

If you’re cooking a plate that requires dried parsley, you can replace it with several different dried herbs. These include sage, basil, endive, and marjoram.

You can also use dried instead of fresh parsley, but you’ll have to use a smaller amount because of the stronger taste. For example, if you normally add one tablespoon of parsley to your recipe, you can use a teaspoon instead for dried herbs.

Dried herbs should be used in the recipe itself, not as garnish. If you’re looking for a garnishing parsley substitute, it’s better to stick to fresh greens to keep the color.

Chervil leaves are curly and green like parsley, though they have more of a frilly texture. Chervil is in the parsley family with a mild flavor and hint of anise. You’ll also see this called French parsley. It’s a perfect alternative for cooking, especially in French cuisine.

Chervil is commonly used as a seasoning for dishes with mild flavors because of its delicate taste. Chefs usually add it at the end of the cooking process, so the flavor stays intact.

When choosing chervil leaves to substitute for parsley, avoid the ones that are blossoming. Once it bolts, the leaves will be too bitter for your recipe.

Oregano is best used for Italian recipes and Mediterranean cuisines in general. In other recipes, its taste may be overwhelming if not used sparingly.

Generally, you should use it to substitute for parsley if you’re looking for a strong, relatively bitter taste. For example, if you’re making garlic bread, oregano would be a perfect alternative to parsley. Think of this one when making pasta or pizza sauce.

Just make sure to use it in smaller quantities because its taste can be too potent.

Note: This is another herb that grows extremely easily and should be a staple in your herb garden. I can’t tell you how much money I have saved over the years by growing my own.

Tarragon is a popular green herb that has long leaves and slim stalks. It has a chemical compound called estragole, which has taste is close to that of licorice, and it has a strong aroma. People use it widely for French recipes, and it is perfect for making sauces, salads, chicken, and even fish.

If you want to use parsley for garnishing, you can substitute it with tarragon. This also works well in salad dressings, but use it sparingly in cooked dishes until you know you like the flavor.

Most folks don’t think about using carrot tops, except as a garnish maybe. But the reality is that these may an excellent option for recipes calling for parsley. I do recommending using them in a cooked dish, as they can get a bit bitter raw.

They do work wonderful as a garnish, with big, frilly leaves that really add some interest to the plate.

This is the most flexible. Each of the replacements have a distinctive taste, so make sure you like them before adding a lot to the recipe.

Typically, the fresh herbs will look much better than the dried alternative. I particularly like the endive for garnish as it is really colorful, yet always grab curly parsley as my go-to option.

Can coriander be used in place of parsley?

You can use both of these leafy green herbs interchangeably with guidance. cCoriander and parsley both come from the Apiaceae family of herbs. Both of these plants all grown on long thin stems and the leaves look so familiar that we often mistake them at the grocery store if we aren’t careful. The recommended way to tell the two apart is to do a quick sniff test.

Are parsley and basil the same?

Not at all. Basil comes from the mint family just like oregano. Parsley comes from aromatic Apiaceae family such as chervil and fennel.

Can you substitute thyme for parsley?

Use thyme as a last resort as a substitute for parsley as it is has such a strong woody flavor.

Can you substitute oregano for parsley?

Oregano has a strong and savory flavor coming from the mint family. It will only substitute if you are going to use it as a garnish but not in a recipe unless you scale it back quite a bit.

What can I substitute for parsley in garlic bread?

No worries. Since parsley has minimal flavor, choose oregano or Italian seasoning for the garlic bread.

Recipes that Use Parsley

Honey Dijon Salmon – This easy recipe works well with any of the herbs listed above as a replacement for parsley. This calls for dried parsley, but you can swap it out with anything listed above.

Avocado Tomato Salad – I love this 10 minute recipe! It calls for fresh parsley, but you can easily change up the herb for some of the alternatives. Since this doesn’t cook the parsley, you really get the bright, fresh flavors popping through.

Easy Pasta Salad – This is another recipe that is packed with flavor. In fact, the parsley is the star of the show, with ⅔ cup of it freshly chopped.

If you’re looking for a parsley substitute, you have a long list to choose from. Although parsley has a distinctive taste, a lot of herbs have the same properties. So, finding a suitable alternative shouldn’t be too hard.

You can use oregano for Italian dishes, tarragon for French dishes, and celery for soups and stews.

More Substitutes to Use in Your Kitchen 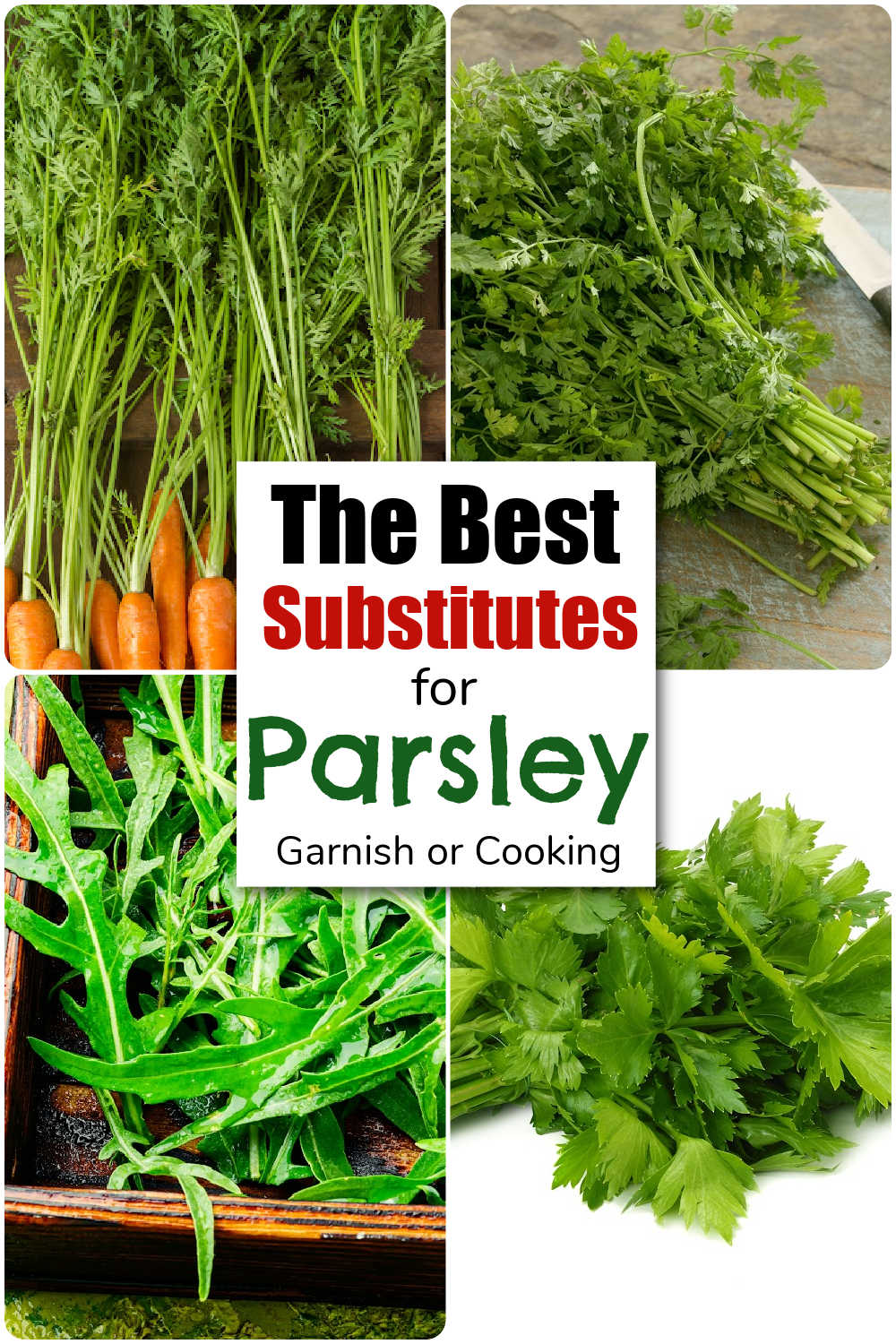 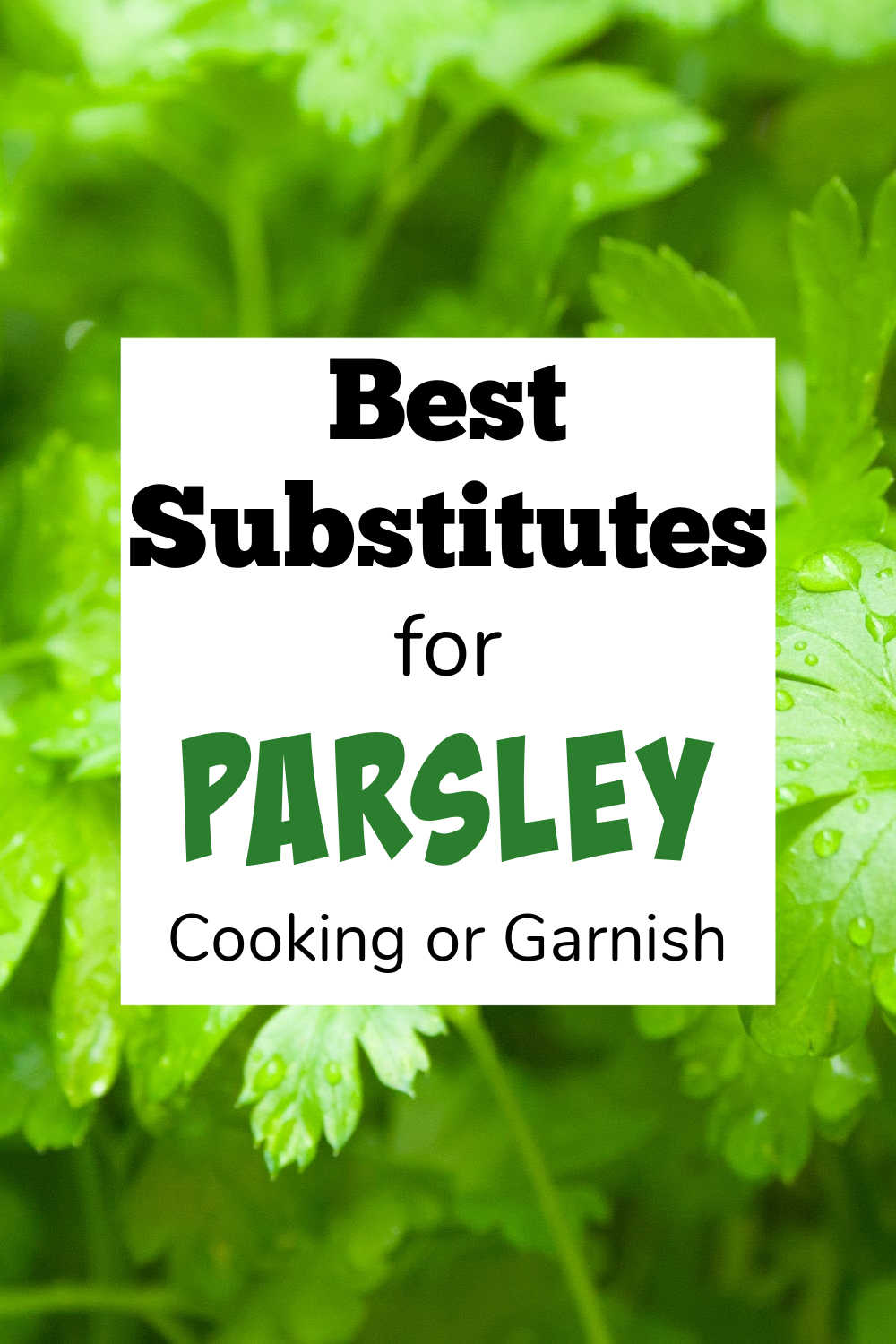