Whether you find yourself fresh out of coconut cream or simply don’t like the taste, here are some of the Best Coconut Cream Substitutes you can use, including measurements and equivalents!

Made with coconut purée and water, coconut cream brings out the rich, creamy flavor and texture to desserts, savory dishes, smoothies, milkshakes, and more. It adds a wonderful aroma and delicate sweetness to a dish even without additional sweeteners.

But coconut cream isn’t readily available to everyone. It’s not exactly a household staple, and not everyone likes the taste.

If that sounds like you, this is the place to be to find out all of the ingredient swaps you can do to make your recipe turn out every time, even when using a substitute.

In a Hurry? Here’s an Overview of the Substitutes

Here are some of the best coconut cream replacements that work almost like the real thing:

Whenever I stumble upon a recipe that calls for coconut cream, I usually just buy coconut milk or make it myself.

It’s much more versatile than buying the cream itself, so I can use it in more than one recipe if there’s some left over. It’s easier to find, too. Coconut cream is only available in my local Asian supermarket, and they often don’t have it in stock.

Coconut milk and coconut cream are essentially the same things. The only difference is the consistency, with the cream being thicker. They’re both made with the same two ingredients, so they taste quite similar.

To use coconut milk as a substitute in desserts, you’ll first need to refrigerate it. This allows the milk fat to split and thicken on top.

Skim the solidified fat with a spoon and put it in a separate container.

Whisk it in a consistent, circular motion until it develops a cream-like consistency. And there you have it—you’ve made your own coconut cream! You can use this as a filling, topping, and the like.

If you’re using coconut in savory recipes, you don’t have to refrigerate the milk. Instead, use a direct 1:1 ratio and reduce the liquid content in the original recipe so it won’t be too runny.

Alternatively, you can cook the dish a bit longer to thicken the milk’s consistency.

Despite the similarities in the name, cream of coconut and coconut cream are two different things. Cream of coconut is the sweetened version. It’s much like sweetened condensed milk; it even has the same thin, syrup-like consistency.

Cream of coconut is mostly used in desserts and drinks, like milkshakes and piña coladas.

Just make sure to reduce the sugar and liquid content of the recipe, as this is quite sweet and isn’t as thick as the alternative.

This may not be the best choice for savory dishes.

For people who don’t like the taste of coconut cream, heavy cream is the perfect alternative. It more or less has the same consistency and is just as creamy but without the coconut aftertaste. You can whip it up, too, making it the ideal choice for recipes that call for a creamy topping.

Tip: If you want taste of coconut, mix some dried coconut or coconut flavoring with the heavy cream to imitate the desired flavor.

For those who can’t consume dairy because of dietary restrictions, vegan whipped topping is a great alternative.

Non-dairy whipped topping is a fantastic stand-in, especially for desserts and drinks. It works with savory dishes, too; but just make sure the vegan alternative is unsweetened!

When swapping out the heavy cream and non-dairy cream, use a 1:1 ratio.

Yogurt is a great alternative in desserts and certain savory dishes. You can use whatever yogurt variety you have available, whether it’s the high-fat Greek kind or the low-fat 2% milk kind. You can also use non-dairy yogurt if you wish!

Yogurt isn’t as creamy, but it more or less produces the same results in desserts. Plus, it adds a crave-worthy tangy flavor to desserts and keeps baked goods moist. It also encourages leavening when used with baking soda.

It’s a good idea to add some shredded or dried coconut to retain the original coconut flavor of the recipe.

Note that yogurt doesn’t work in recipes where cream needs to be boiled, like curries and sauces. This is because yogurt splits and curdles.

If you want to use yogurt in a stovetop dish, mix it in at the very end and turn the burner off before it simmers. That way, the yogurt will remain intact and mix nicely with the dish.

When using yogurt as a substitute, use a 1:1 ratio.

If you don’t mind going in a different direction flavor-wise, nut butter is something you should consider. Although different in taste, it adds the same amount of creaminess. It won’t ruin the consistency, either. Just make sure it’s unsweetened so it doesn’t add too much sugar to a savory dish.

If you’re using it for dessert recipes, reduce the sugar content of the original recipe so it doesn’t taste too overpoweringly sweet.

Since this is much thicker than coconut cream, you’ll have to dilute it with a bit of water before using it as a substitute. If the recipe calls for a 14-ounce can of coconut cream, mix around 5 ounces of nut butter with about a cup of water.

The consistency of nut butter differs from one another, so add the water gradually so it doesn’t become too runny. For best results, mix with a whisk, blender, or food processor.

Once thoroughly mixed, use the thinned nut butter as a 1:1 substitute.

Evaporated milk is a dairy-based substitute that works wonders in desserts and savory dishes alike.

Evaporated milk is just regular milk with about 60% of the water removed. It’s thicker, creamier, and sweeter than regular milk, and shares the same consistency as coconut cream.

This substitute isn’t to be confused with sweetened condensed milk.

Condensed milk is much thicker and sweeter than evaporated milk, so it can’t be used in savory dishes.

It’ll work well in desserts if thinned out a bit, but since it’s so sweet, you should only use half as much as you would coconut milk. Also, you’ll have to significantly reduce the sugar content in the original recipe.

When using evaporated milk as a substitute, a 1:1 ratio is sufficient.

Dairy cream shares the same consistency and creaminess as coconut cream, making it a great substitute if you don’t have the latter available.

Like coconut cream, dairy cream is used as a thickening agent in savory dishes like gravies, soups, and curries.

To substitute coconut cream with dairy cream, use a 1:1 ratio.

If you don’t have any of the options above, milk or plant-based milk works as a last-resort solution.

It doesn’t have as much flavor or creaminess, but it’s extremely versatile and can be added to both sweet and savory dishes.

It won’t add as much flavor as the other substitutes on this list, though, so make sure to add extra flavorings to compensate. If you have dried coconut, coconut powder, or something similar, mix it in with the milk before using it.

Since milk is much thinner than coconut cream, mix about two teaspoons of flour with one cup of milk to make it thicker. Then, use a 1:1 ratio.

If you’re lactose intolerant or vegan, substitute whole milk with a plant-based option, such as:

Like regular milk, plant-based milk has a thinner consistency. However, it works marvelously in savory dishes, sauces, and soups because it adds a unique flavor to the dish.

When using plant-based milk, use a 1:1 ratio and let it cook a bit longer for it to thicken. Alternatively, you can mix in about two teaspoons of coconut flour with the milk to not only add a little flavor but also thicken its consistency.

If you don’t have coconut cream in your pantry, don’t fret; there are a ton of alternatives you can use in its place!

Coconut milk is the closest substitute, but you can also use heavy cream, yogurt, nut butter, and, in a pinch, regular milk or plant-based milk. 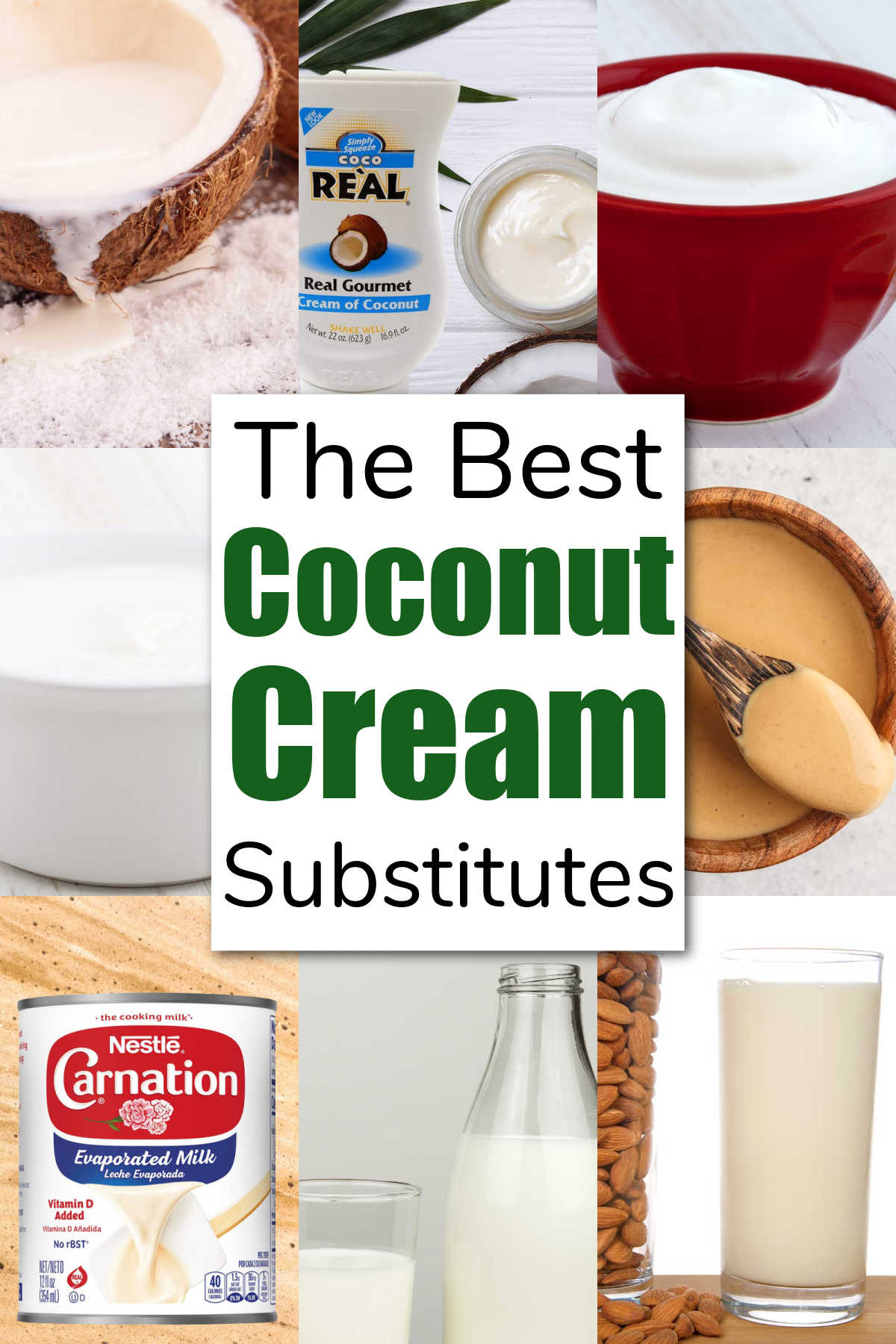 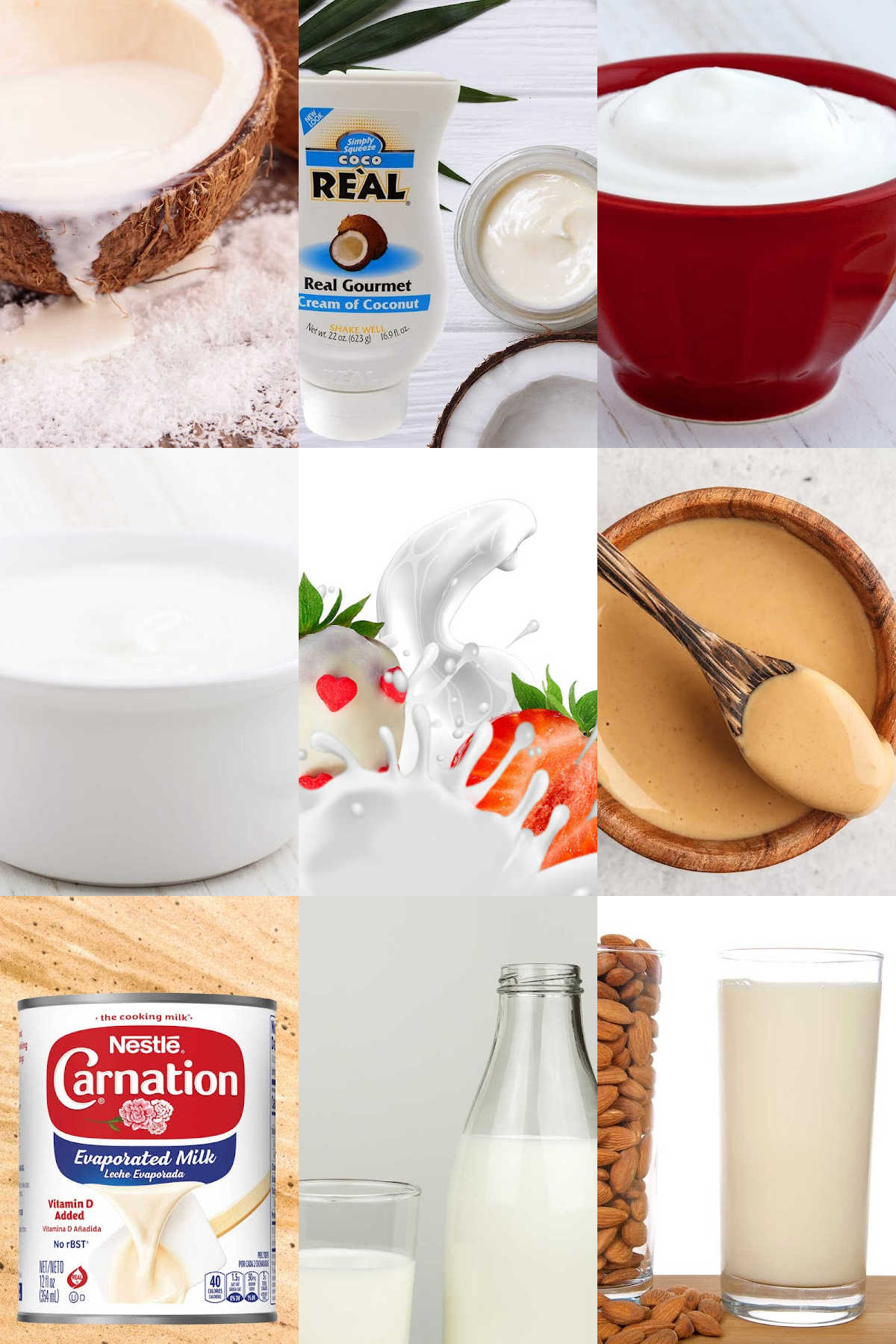 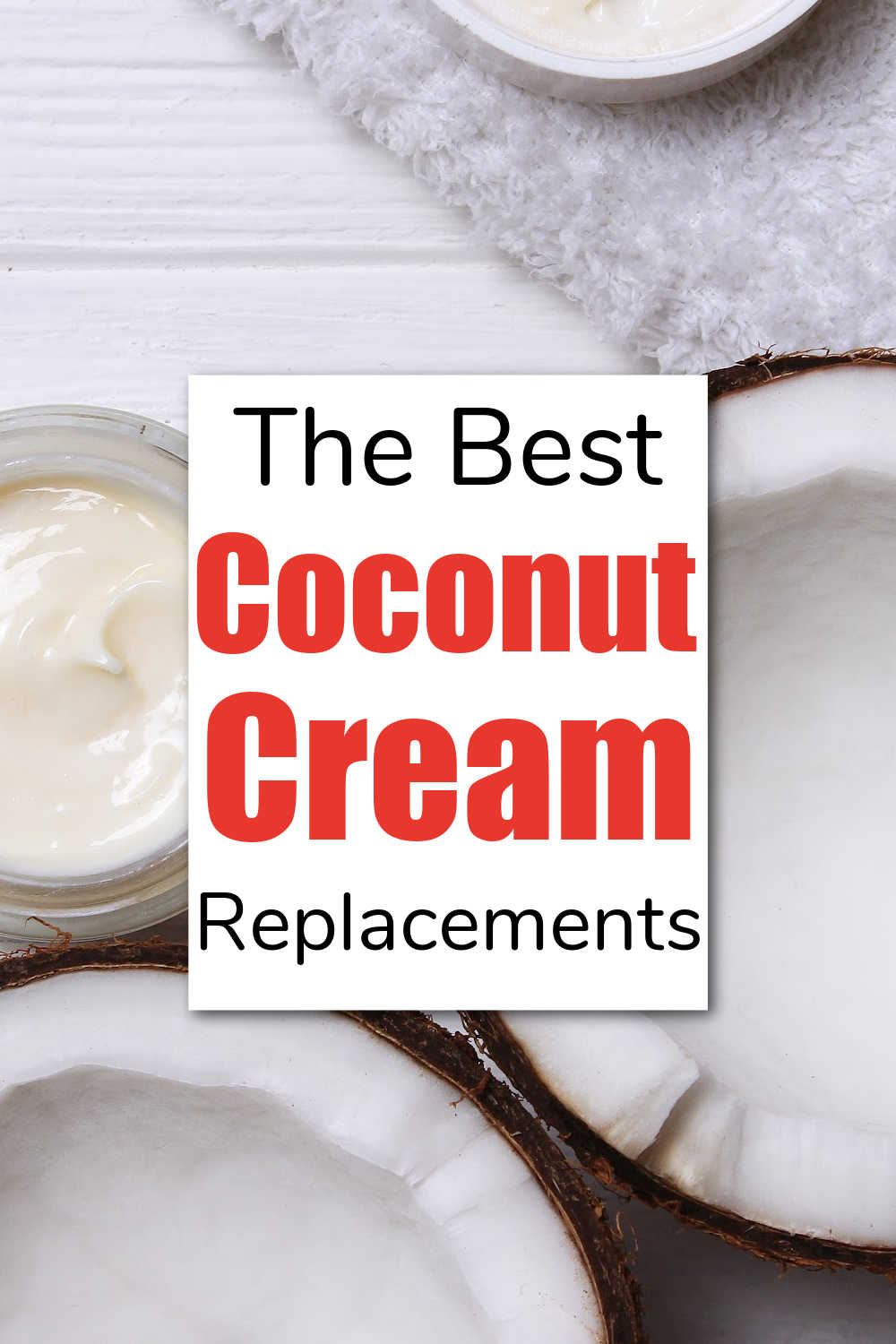