Adobo sauce is an aromatic and delicious Mexican cooking condiment. Even though it’s nowhere near as popular as salsa and guacamole, Adobo sauce is a staple ingredient in Mexican cuisine. Here are the Best Adobo Sauce Substitute cooking options for your recipes.

In most grocery stores, you can find Adobo sauce either next to the tomato sauce or in the international aisle. It’s often sold in tin cans as a preservative for chipotle chili peppers, which can be disappointing if you only want the sauce.

Luckily, if you don’t have the sauce or can’t find it, there are a few similar sauces that can serve as satisfactory Adobo sauce substitutes.

In this post, we’ll lay out the top Adobo sauce replacements, so sit tight!

What Is Adobo Sauce?

Adobo sauce is a blend of tangy, salty, and spicy flavors with a subtle hint of sweetness. It was originally used to flavor and preserve meats, but it’s now best known for its association with chipotle peppers.

The word “Adobo” literally means marinade, sauce, or seasoning in Spanish. Still, it has vastly different meanings across Hispanic cuisine.

In the Philippines, Adobo refers to a cooking method and a popular dish. However, in Mexican and Caribbean cuisines, Adobo is a condiment used to flavor food.

Here are the best substitutes:

Adobo sauce’s earthy, tangy, and savory flavor blend can be hard to recreate. Luckily, the following handful of substitutes are the closest sauces in flavor to the Mexican condiment.

You can use each one to fill different flavor voids in recipes that call for Adobo sauce. You can also adjust them to accurately emulate the flavor profile.

Chili garlic sauce refers to a group of sauces rather than a single product, but they all share a baseline of ingredients and flavors.

A standard sauce combines the spiciness of chili peppers, the savory flavor of garlic, the sourness of vinegar, and the sweetness of sugar.

Admittedly, this sauce isn’t a perfect stand-in for Adobo, but it remains one of the most common substitutes due to its similar flavor profile.

To bridge the gap between both flavor profiles, mix the chili garlic sauce with soy sauce at a ratio of 1:2 respectively.

Ultimately, should you use this sauce as an alternative, you should go for the standard ones and steer clear of Asian varieties.

Chili peppers used in those sauces are often distinctly different from those used in American-style chili garlic sauce. They also contain flavors associated with Asian cuisines, such as ginger and fish sauce.

Ranchero is a tomato-based sauce that’s loaded with seasonings like oregano, chili peppers, garlic, onion, and olive oil, among other ingredients.

It has a zesty, smoky, subtly spicy, and salty flavor, but it’s milder than Adobo sauce’s flavor profile.

It’s ideal for recipes that don’t need the bitter tang or sweetness of the Adobo sauce, such as dips and dressings.

However, if you want a one-for-one swap-out sauce, you can add a pinch of chipotle, ancho, or guajillo chili powder to the ranchero sauce, and it’ll be indistinguishable.

You can also add a dash of soy sauce or vinegar to give the ranchero a more pronounced flavor.

Keep in mind that ranchero sauce is salty, so taste as you go to ensure you’re not over-seasoning your dish.

If you can’t find any Adobo sauce, you can look for canned chipotle. Chipotles are Mexican dried and smoked jalapeño chili peppers that are often sold canned in Adobo sauce.

You can either drain the sauce from the chilis or blend them for a more intense smoky flavor.

Just keep in mind that Adobo sauce from canned chipotle, with or without the chilis, has a slightly more fiery heat than regular Adobo sauce. So, if you don’t want to cook a hot dish, don’t use this as a substitute.

Sweet smokey chilis combined with spices create a distinct smokiness flavor from combing the arbor and piquin peppers that will make your recipe sing.

Even though this says “hot sauce” the heat is more than mild but lower than a medium heat.

These dried poblano chilis are rehydrated and made into a paste that has a mild to medium heat for your recipes.

This one is often used to spice up grilled meats, soups or stews as the ingredients include vinegar, lime juice, soy beans, sage, onion and garlic.

This is made by grinding the annatto seeds followed by adding in vinegar, cumin, cloves, cinnamon and other spices to create a paste that has a nutty, sweet and earthy taste to it.

The taste is mild so this is a favorite when trying to keep the heat to a minimum.

Our final Adobo sauce substitute option is to make a homemade sauce. Surprisingly, you can replicate the classic Mexican flavors of Adobo sauce with a few pantry staples.

Step One: Add the chili powder to a food processor and pour one cup of boiling water over it. Stir the contents and let them steep while you prepare the other ingredients.

Step Two: Heat the olive oil in a medium pan and cook down the onion for about four to five minutes. Once it’s softened, add the garlic and let it cook for 30 seconds to a minute.

When the garlic becomes fragrant, add the tomatoes with their juices, vinegar, salt, cumin, cinnamon, oregano, black pepper, and cloves.

Step Three: Stir for a minute, then stir in 1/4 cup of water. Let the mixture simmer for five minutes on medium to low heat.

Step Four: Lastly, add the cooked mixture to the chili powder in the food processor, and pulse it all together until the mixture reaches the consistency of ketchup. Season with salt and sugar to taste, and if the mixture is too thick, you can add a few teaspoons of water.

Keep in mind that you may need to go through a few trials and errors before you get the flavor just right. You can also experiment with different types of chili peppers instead of using chili powder.

Having said that, this homemade sauce is the closest substitute to having instant access to Adobo sauce.

Enchiladas – This popular Mexican dish makes great use of Adobo flavors. Even better, you can use ranchero sauce because it dials down on the vinegary taste.

Birria – This slow-food recipe allows you to cook beef meat in a delicious Adobo stew. You can use other Adobo sauce substitutes to introduce new and interesting flavors to the dish.

Chicken Adobo – This delectable comfort dish is enhanced by an Adobo sauce turned gravy, which you can make at home.

Adobo Vinaigrette – This warm dressing goes well with any salad, and you can use the Adobo sauce in canned chipotle for an extra kick.

Is Filipino Adobo the same as Mexican Adobo?

Aside from their names and the use of vinegar in both, Mexican Adobo and Filipino Adobo have nothing in common.

To begin, Mexican Adobo is a thick, red sauce made from crushed chilies, tomatoes, spices, and vinegar. It’s often used as a marinade or a sauce in which to simmer meats.

Filipino Adobo, on the other hand, is a popular Filipino dish and cooking method. The term “Adobo” refers to a cooking process that involves marinating various types of meat, vegetables, and any other ingredient in a mixture of vinegar and soy sauce.

Other herbs and spices in this marinade include garlic, bay leaves, and black peppercorns.

Is Adobo sauce the same as chipotle sauce?

Some people may think that those two sauces are interchangeable because chipotle peppers are often canned in Adobo sauce.

How spicy is Adobo sauce?

The heat level of each Adobo sauce varies depending on the chili pepper used in the recipe. Adobo sauces are typically mild to medium in spiciness, but using too much of it can make any dish quite hot.

What’s more, if you use canned chipotle Adobo sauce, you can expect a level of heat ranging from 5,000 to 10,000 Scoville units, which can be on the spicy side for some people.

Adobo sauce’s tangy, slightly sweet flavor profile, which complements most savory dishes, is what has contributed to its growing popularity.

That said, it can be difficult to find in your local grocery store, which is why fans of the condiment look for substitutes to use.

While most replacements may add a distinct flavor to your dishes, they all have flavor profiles that are similar to Adobo.

If you want a perfect replacement, these alternatives can become indistinguishable from the original condiment with a few minor tweaks here and there.

Still, if none of the options appeal to you, you can make your own Adobo sauce, which is easy and quick to prepare. You can even make any adjustments your palate and dish require.

More Substitute Options for Your Pantry 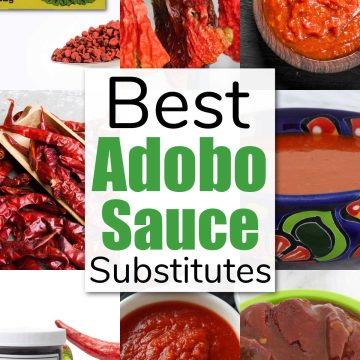 YIELD: This recipe will yield just about 2.5 cups.  Storage: Store in a sealed container in the refrigerator for 1 week.
Tried this recipe?Mention @savorandsavvy or tag #savorandsavvy! 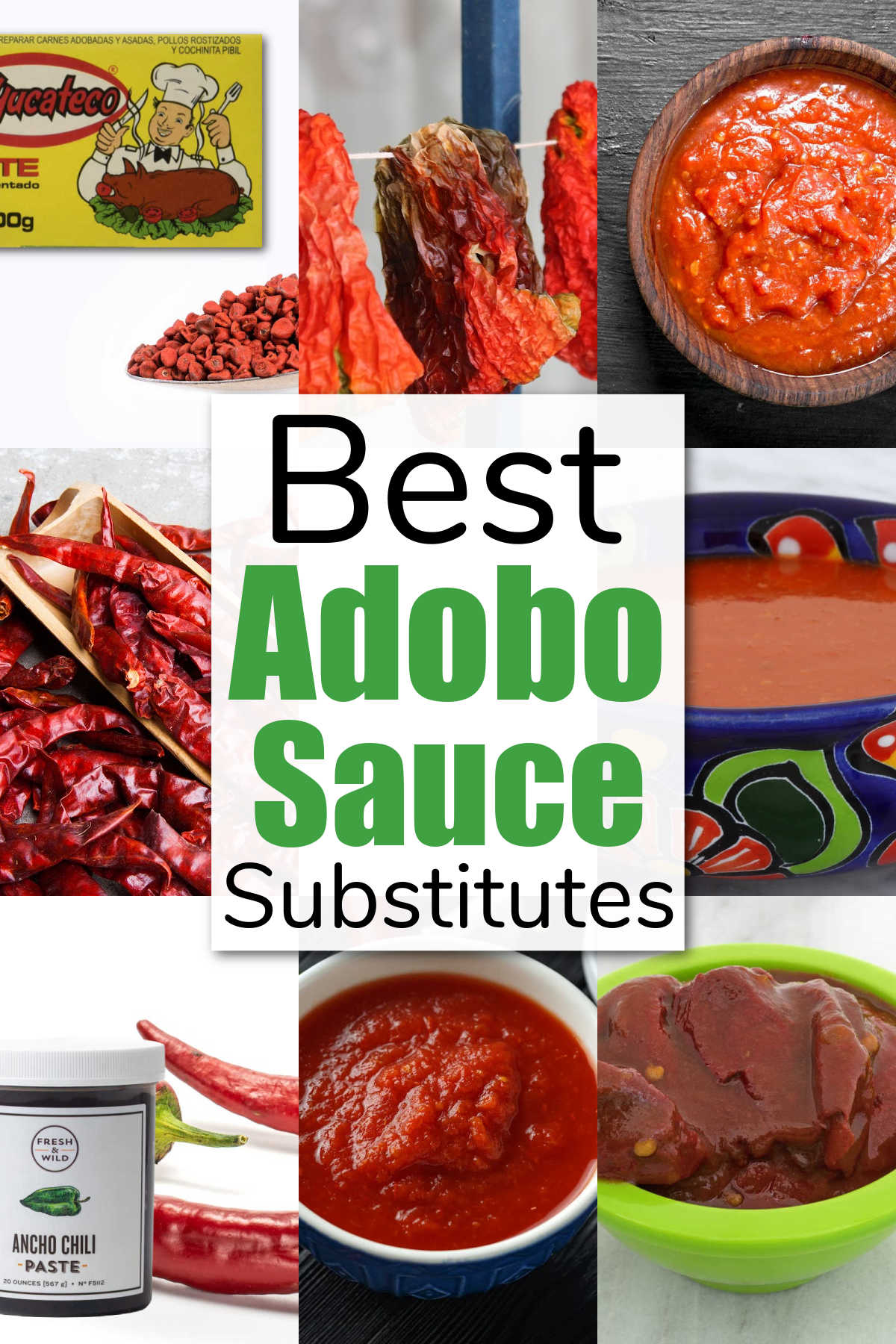 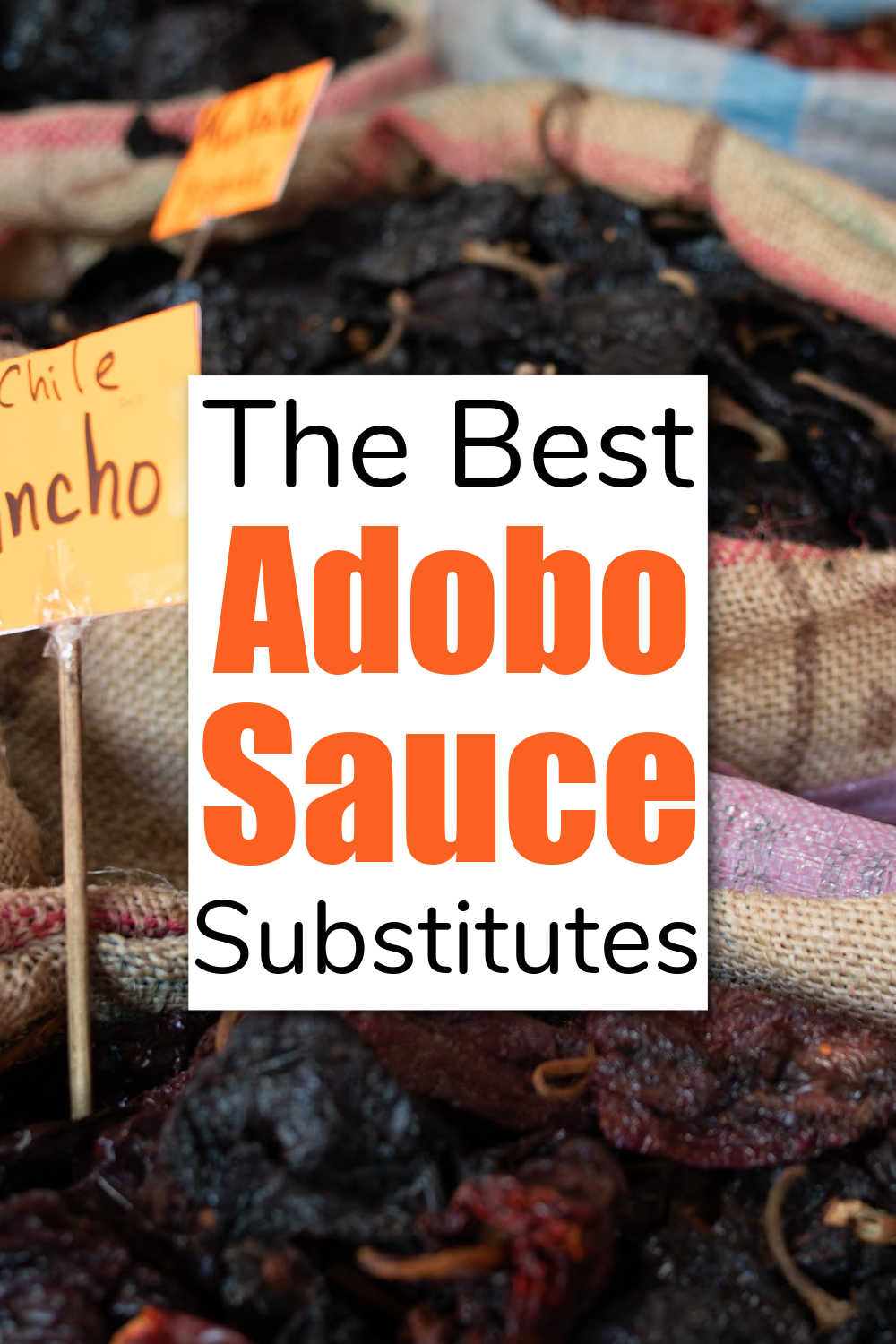