There are a dozen of the Best Egg Wash Substitutes to give your recipes the crispy, shiny finish. Before rushing to the supermarket, check your pantry for these recipe replacements first.

Egg wash, made from diluted beaten egg, is brushed over baked goods to achieve a crispy, shiny sheen and a gorgeous honey-golden surface. It’s the go-to mix for any baked, air fried or deep-fried dish because it’s so effective.

Luckily, there are a ton of egg wash substitutes you can use for that magical finish. I’ve listed all my favorite substitutes down, including how to use them.

❓ Why Use an Egg Wash Substitute

Allergies | There could be the possibility that you or the ones you are cooking for have an egg allergy and need to find alternatives. With ten different options, you are bound to find something that works for you.

Diet Restrictions | For many health issues or if you happen to be vegan, removing eggs all together is more of a health related decision rather than a cost or lack of availability.

Availability | There are times you will be out of eggs and can’t run to the store or the store may simply be out due to the holiday or supply chain issue. These options allow you to scope out your pantry and refrigerator to find other options.

Here are some of the best egg wash substitutes you can use for shine and browning:

Milk is my go-to substitute for two reasons: one, it’s almost always available in my home, and two, it adds a nice, golden color to pastries and bread without the eggy flavor.

To use milk, simply apply a bit of milk on top of baked items with a pastry brush.

If you’re vegan, lactose intolerant, or have specific dietary restrictions when it comes to milk, you can use unsweetened, plant-based milk in its place. Examples include:

Plant-based milk alternatives work great. They leave behind a nice, golden color with some rustic shine.

But unlike milk, these vegan alternatives may leave behind a mild flavor that I don’t taste with milk. For instance, almond milk leaves a faint, nutty flavor to bread and pastries, which may not be suitable for some savory dishes.

It’s important to note that these plant-based milk alternatives don’t add crispness to bread, so if that’s what you’re going for, you’ll have more luck with melted butter.

Butter and baked goods go together like yin and yang—they complement each other nicely! When used as an egg wash swap, it not only adds a light, crispy texture but also an extra depth in flavor. You can’t go wrong with it!

Just make sure to use just enough to cover the surface of the baked item. Don’t soak the dough/pastry with too much because it might prevent the dough from rising. A single stroke is more than enough.

Oil is another popular option that adds luster, shine, and crunchy crust to baked products. It doesn’t brown baked goods as well as an egg wash, but it certainly gets the job done in almost every other aspect.

For best results, use flavorless oils such as canola or sunflower.

If you want to add depth of flavor to your pastries and cookies, use coconut oil. I love the sweetness it brings.

For savory dishes, like garlic bread or meat-based bread, as well as Mediterranean-style baked goods like biscotti, olive oil is a fantastic substitute.

If you want to add lots of caramelized crunch, use honey or maple syrup as a substitute. The caramelized sugar in the honey or syrup will leave a deep golden glow on your baked goods.

Keep in mind that honey and maple syrup don’t do well with baked goods that take a long time to cook. They burn quite quickly in a hot oven, so they are best used in quick recipes such as puff pastries. Also, they’re not suitable for savory breads, unless you want them to taste sweet.

When using honey or maple syrup, just apply a layer or two on the surface of the baked item with a pastry brush. Don’t coat the bread too thickly.

For fried chicken and meat-based bread, mayonnaise is an option to consider.

It is primarily made out of oil and eggs, so it has just about the same effect as an egg wash. Vegan mayonnaise works just as well; it adds shine, crunch, and color to a baked or fried item.

This substitute is targeted toward savory dishes; it doesn’t work well with sweet desserts because of its light tart and tangy flavor.

Since mayonnaise is quite thick, thin it out with either milk or water until it reaches a thinner consistency.

Brush a thin coat of mayo onto the chicken and roll it into the flour, or cover the surface of your baked item with a single layer of mayo wash.

If you want to add a nice, glossy shine to your baked goods without the browning effect, corn starch is your answer.

To achieve this effect, apply the corn starch after the baking process instead of before.

Mix corn starch with water to make a thin wash to brush on your favorite baked goods. Just make sure it is not thick like a slurry.

This is a great substitute for egg wash in fried food, as well. Since it absorbs moisture, it’ll add a nice, crispy finish to your fried item. It works as a binder, too!

Whenever I’m baking anything with fruit, I use molasses as a substitute. This liquid-gold sweetener adds a nutty, caramelized layer to your baked foods, and the crust will be a beautiful golden brown.

Molasses come in multiple variations, so be careful when using them. Light molasses is perfect for baked goods, while medium or dark molasses is more suitable for glazing meat.

Warning: Don’t use blackstrap molasses unless the recipe specifically calls for it, because the blackstrap is quite bitter and may thus change the end flavor of your recipe.

Sweet and creamy, custard powder mimics the goldening effect almost perfectly. It also adds a smooth and lustrous surface to your baked items, while adding a hint of vanilla flavor to the recipe.

To use custard powder, dilute it with equal amounts of water or milk and combine thoroughly. Brush the mixture on the surface of the baked items with a pastry brush once or twice. Don’t soak the dough too much as it may turn it soggy.

Flax seed is hailed as the “ultimate” substitute for eggs. It’s often used in vegan dishes and desserts where moistness and denseness are desired qualities. So, it isn’t surprising that flaxseed can be used as a substitute for egg wash, too—they more or less have the same “gooey” consistency that contributes to their browning effect and shine in baked goods.

To use flax seed as a substitute, you’ll first have to grind whole flax seed with a coffee grinder. Then, mix a tablespoon of freshly ground flaxseed with three tablespoons of water until it turns into a slurry.

Let it sit for about five to ten minutes until it thickens. You’ll know it’s ready when a sort of gel forms.

If you’re not too fond of the taste of flax seeds, chia seeds work just as well.

Combine one tablespoon of ground chia seeds with around two and a half tablespoons of water. Whisk together for about a minute or two or until you reach an egg-like consistency. Use a pastry brush and lightly coat the surface of your baked items with the mixture.

Yogurt is basically just thickened milk, which is why it works just as well as the milk substitute. It’s also a great binder for sealing pastries and bread.

Since yogurt is much thicker than milk, add water before using it.

Brush the much thinner yogurt on top of your baked goods before baking in the oven.

Tahini is a Middle Eastern condiment made from toasted and ground sesame seeds. Since sesame seeds are high in oil, grinding them into a fine paste turns them into butter.  So tahini is basically just sesame seed butter.

Tahini is best used for pastries. It leaves a faint but welcome nuttiness to sweet baked desserts and adds a nice matte golden coloring to the food’s surface.

Since tahini is much thicker than egg wash, dilute it with water. Add two to three tablespoons of water per tablespoon of tahini and mix until you reach a light, milk-like consistency.

If you don’t have eggs in the fridge or simply have food sensitivities, try the egg wash replacements above. Although they don’t mimic the shine and golden hue of egg wash perfectly, they add their own touch of magic to your baked items! 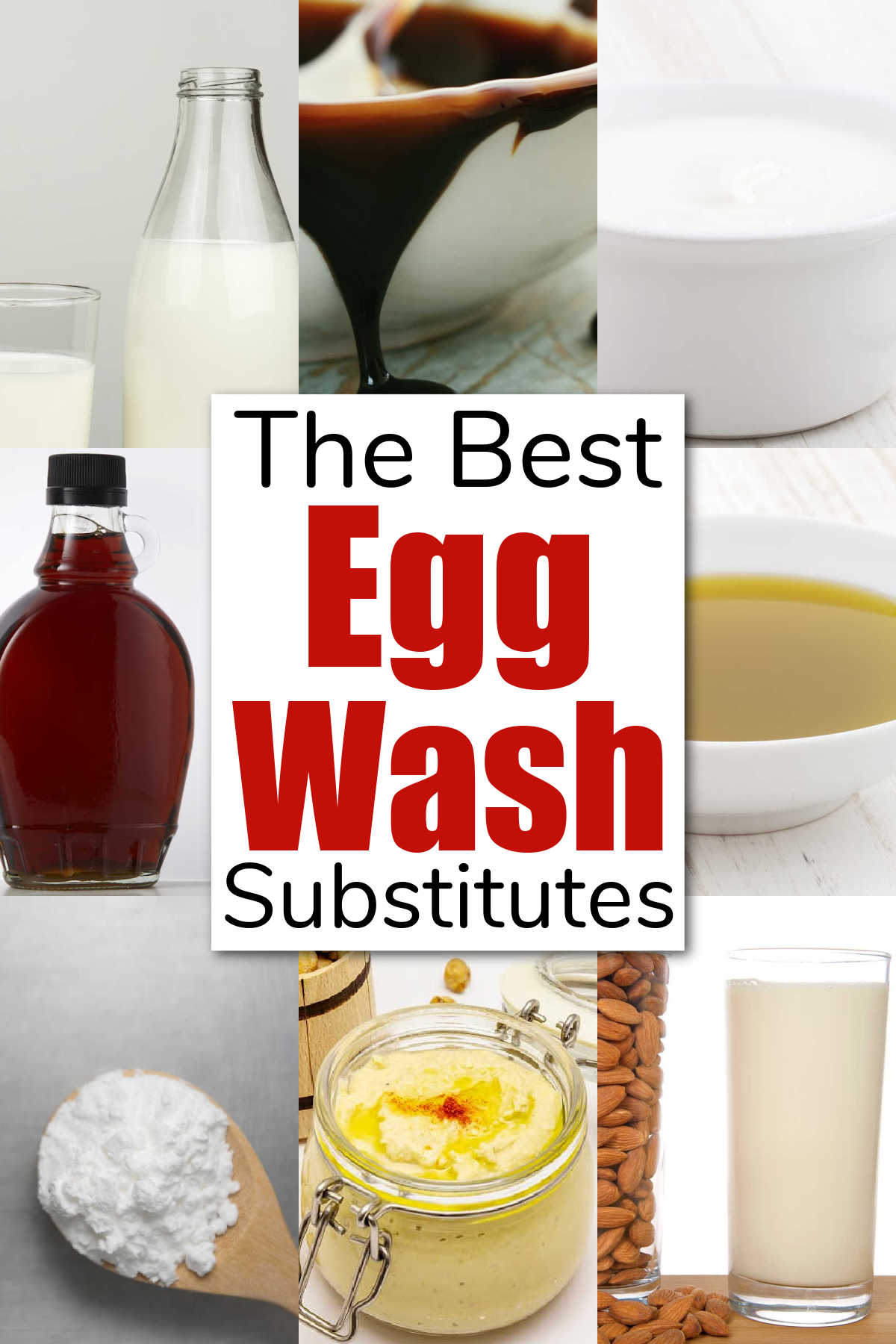 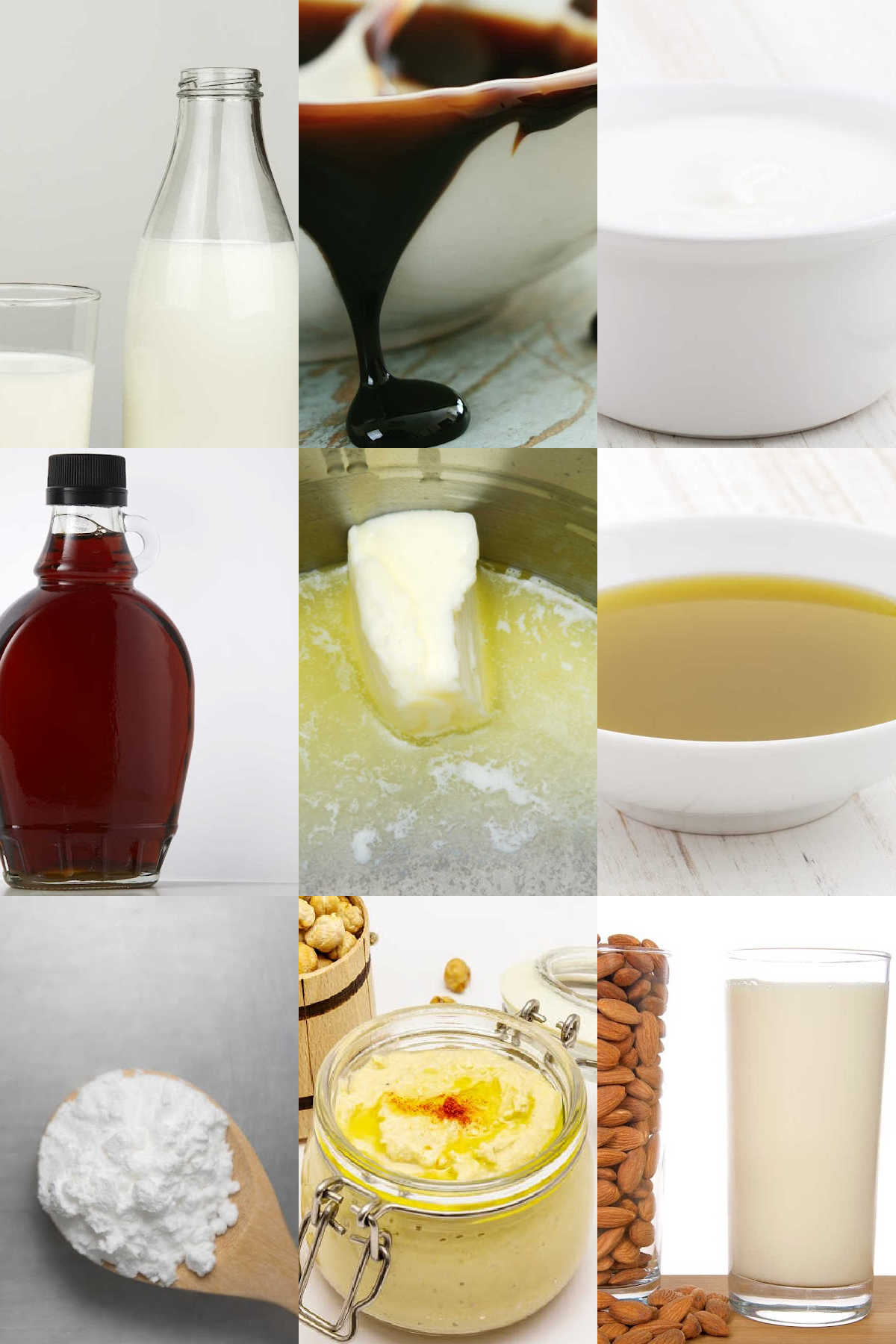 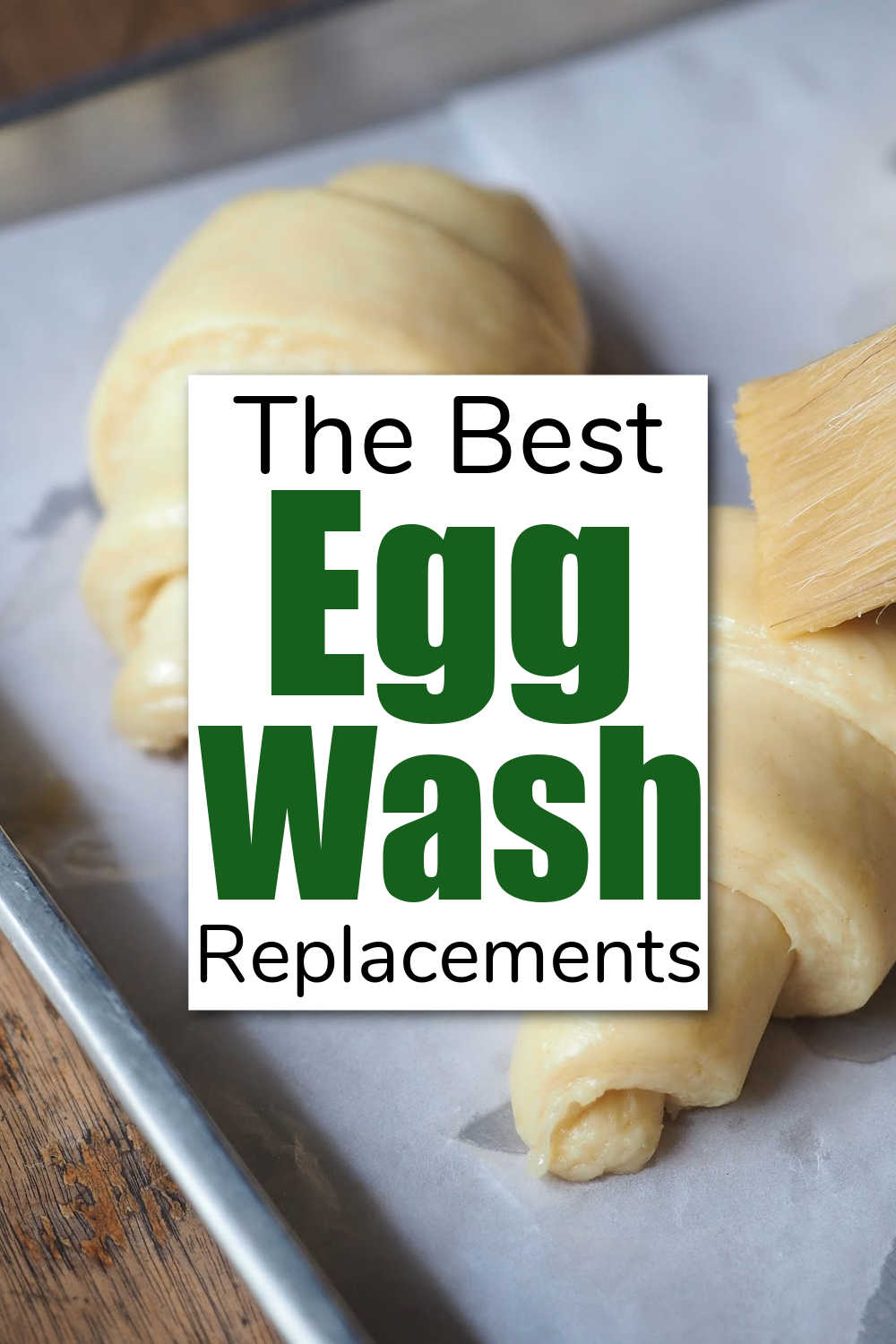