These are the Best Coconut Sugar Substitutes to use when choosing a natural alternatives or if you’re unable to find coconut sugar at the local supermarket.

Coconut sugar, also known as coconut palm sugar, is a natural sugar made from the sap of coconut palm. It’s a healthy alternative to artificial sweeteners, so it often appears in low-calorie desserts and recipes.

Despite popular belief, coconut sugar doesn’t taste anything like coconut. Instead, it tastes like brown sugar with hints of caramel. It’s slightly toasty, too, with unique smoky and musky qualities.

Unfortunately, it isn’t really all that common in the US. So if your recipe calls for coconut sugar, here are some of the best substitutes you can use in its place!

Quick read: 20+ Sugars and How to Use Them

In a Hurry? Here’s an Overview

Here are some of the best substitutes you can use in place of the real deal:

In terms of nutrients and calories, it is near-identical to regular cane sugar. It more or less contains the same amount of iron, calcium, zinc, and potassium, as well as soluble fiber inulin—a naturally-occurring soluble fiber that’s linked to a lower risk of blood sugar spikes.

Cane sugar tastes much like regular sugar, except it is a little smokier and richer because of the natural molasses it contains. It also has an earthy, oxidized aroma to it, much like coconut sugar.

To substitute with cane sugar, use a 1:1 ratio.

Light brown sugar is much easier to find in the US, making it a great alternative for recipes.

When placed side-by-side, light brown sugar looks quite similar to coconut sugar. They’re both light brown in color and have the same granular consistency.

They’re nearly identical in taste, too. Like coconut sugar, brown sugar has a strong caramel taste because of the molasses it contains.

Brown sugar is slightly sweeter though, so reduce the recipe’s sugar content when using it. For every cup of coconut sugar required, use about ⅔ cup of light brown sugar. Don’t press the substitute sugar into the measuring cup; keep it loose.

Like coconut sugar, date sugar is a product of a fruit tree and thus less processed than more conventional sugars. It’s made from oven-dried dates that are grounded to granules.

Date sugar has a subtle butterscotch-like flavor, which isn’t that far off from coconut sugar.

Since date sugar is just as sweet as coconut sugar, so use a 1:1 ratio when substituting one with the other.

Turbinado sugar, also known as raw sugar, is minimally processed and refined sugar that retains some of the original molasses, giving it a subtle caramel-like flavor. It’s healthier than fully refined sugar, making it a good choice for health-conscious individuals.

The only issue with turbinado sugar is that, unlike coconut sugar, it doesn’t melt into the batter well while baking, leaving you with a lightly crunchy and sparkly exterior. The added texture isn’t necessarily a bad thing, though; some people are quite fond of it!

Turbinado sugar dissolves just fine in sauces, marinades, and creamed mixtures, so if you’re making any one of those, this is a wonderful substitute.

Use a 1:1 ratio when replacing.

Honey is a popular substitute because it’s delicious, versatile, and available nearly everywhere. Plus, it’s healthy—healthier than refined sugar, at least.

Honey is believed to prevent heart diseases, aid in blood sugar management, eliminate unwanted bacteria, and it has other benefits. So, if you’re using coconut sugar for its health benefits, honey is a good stand-in.

If you’re able, opt for raw honey instead of pasteurized. Raw honey is generally healthier than pasteurized honey as it doesn’t contain any hidden ingredients. It’s the real true form of honey, so it has a more complex and unique flavor that goes smashingly in desserts.

Since honey comes in liquid form, use about ¼ cup of honey for every cup of coconut sugar required. You may also need to reduce the liquid content of your recipe so as to not change its consistency.

Maple sugar has a similar flavor profile, so it works well in recipes that require coconut sugar.

Maple sugar adds a caramel and nutty flavor to baked goods and dishes. However, it has a slightly more complex flavor profile. As you might expect, it tastes faintly of maple. It also has hints of butter and vanilla to it.

When using maple sugar as a substitute, use a 1:1 ratio.

If you can’t get your hands on maple sugar, maple syrup works just as well. It definitely leaves a more distinctive flavor, but it adds a welcome depth of flavor to desserts and savory dishes.

For every cup of coconut sugar required, use only ¼ cup of maple syrup. You’ll need to adjust the liquid content of your recipe.

Stevia is a low-carb substitute that’s available in both powder and liquid form.

This sugar-free sweetener is made from the leaves of a stevia plant, which is native to Paraguay and Brazil.

Stevia has fewer calories than both regular sugar and coconut sugar, and may thus aid in weight management. For this reason, stevia is the go-to choice for individuals on a strict low-calorie or low-carb diet.

Stevia doesn’t have much going on for it in terms of flavor. It really just tastes sweet. When added to coffee or tea, it might taste a bit like menthol, but the menthol is so faint it’s practically nonexistent.

Note: Stevia is 50 to 300 times sweeter than coconut sugar, so use sparingly!

Taste and adjust until you reach the desired sweetness. Generally, for every half cup of coconut sugar required, only use 1 teaspoon of stevia. That may seem like almost nothing, but trust me, that’s more than enough.

If you’re using liquid stevia, use about ⅓ cup for every one cup of coconut sugar replaced by stevia. But again, add to taste!

Molasses shares the same toffee-caramel flavor as coconut sugar. Molasses is a bit smokey and faintly acidic than the real thing, but the difference isn’t all that noticeable in the final product.

When substituting with molasses, keep in mind that there are four kinds of molasses: light, medium, dark, and blackstrap.

Light molasses is the best substitute because of its mild flavor.

Medium and dark molasses bring a robust, in-your-face flavor, and while not unpleasant, isn’t suitable in many recipes.

Blackstrap molasses is bitter and considerably less sweet, so it’s not a good substitute for coconut sugar.

As for the ratio, add to taste. Start with half a cup of molasses for every cup of coconut sugar required, and go from there. And remember to adjust the liquid content of the recipe, too.

Agave syrup, also known as agave nectar or maguey syrup, is a sweetener made from the fluid of the blue agave plant. It’s a popular sweetener for beverages, toppings, and baked goods because it tastes like a combination of honey and maple syrup.

That said, agave syrup contains high amounts of carbohydrates, fructose, and calories, so don’t use too much, too often.

When using agave syrup as a substitute, use half a cup of syrup for every cup of coconut sugar required.

It has an earthy, caramel-like taste to it. But that’s where the similarities end.

Piloncillo is mildly smokey in flavor—much like molasses or burnt sugar. It greatly differs in texture, too. Still, piloncillo is a great substitute if you don’t have the alternatives above available.

To use piloncillo, slice or chop it up into small chunks. You can also use a large cheese grater. Then, use a 1:1 ratio.

Although it isn’t that common in the western world, but you can replace it with the substitutes above.

The closest replacement in terms of taste is brown sugar, followed by cane sugar. For a more complex flavor, use honey, maple syrup, and date sugar. 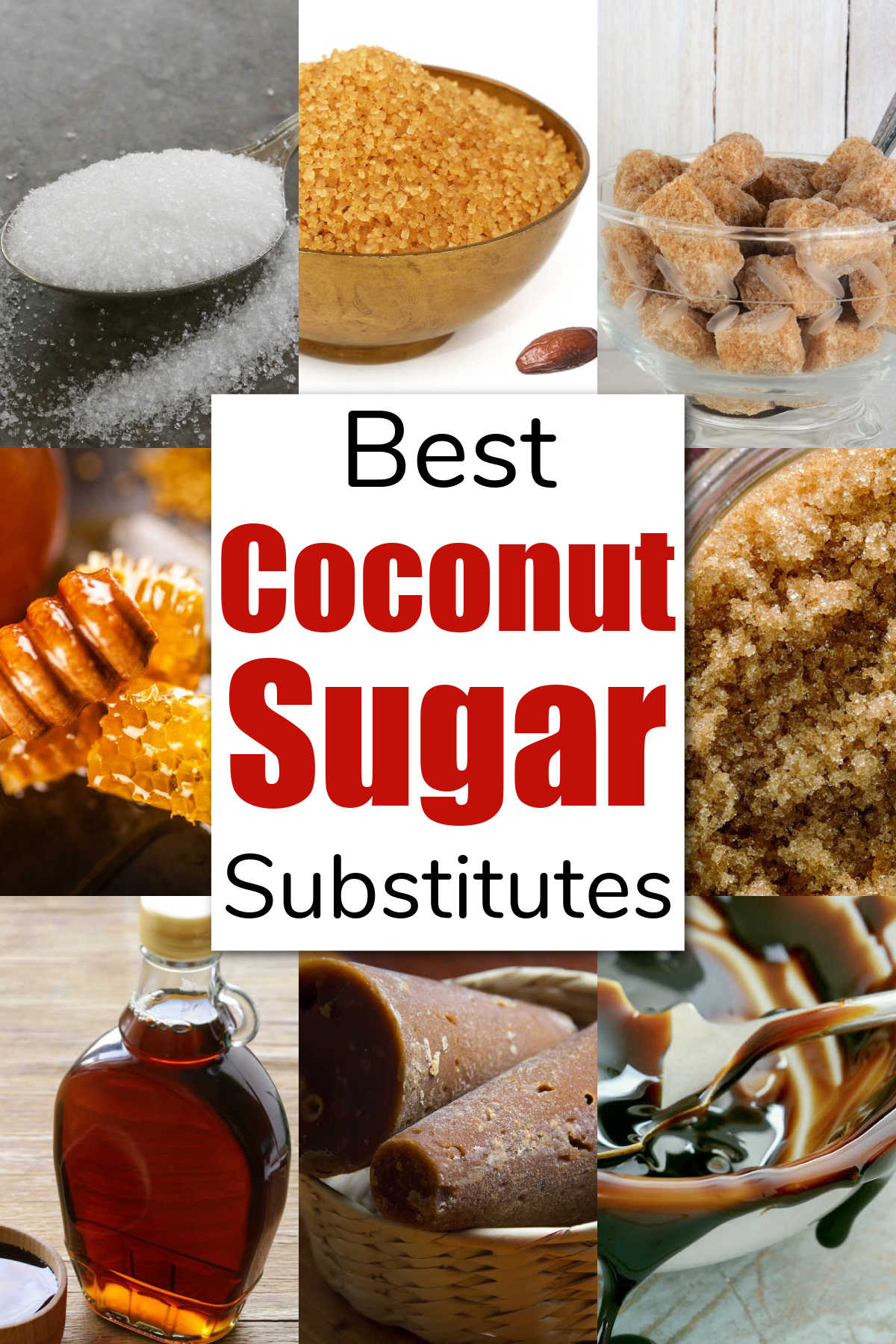 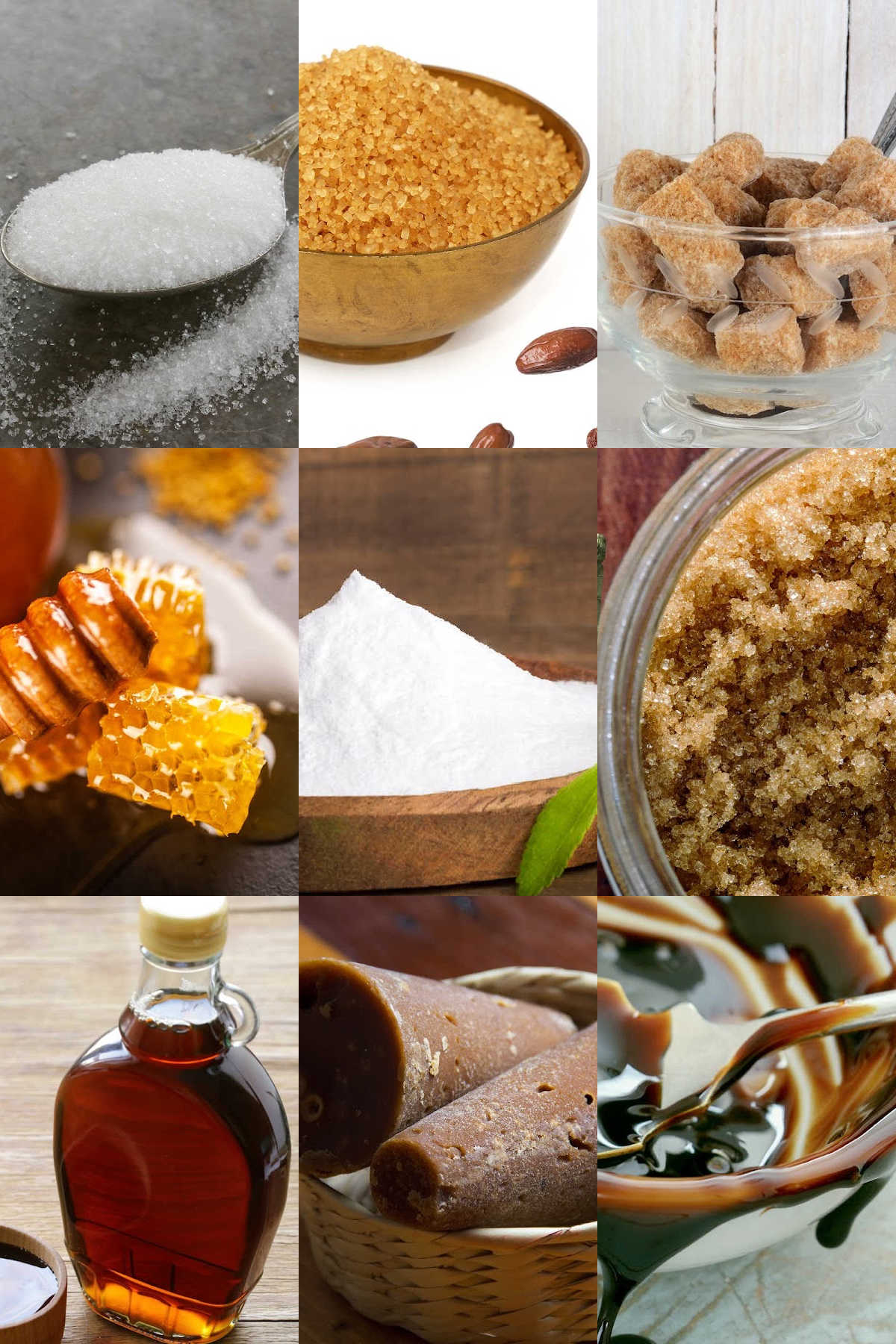 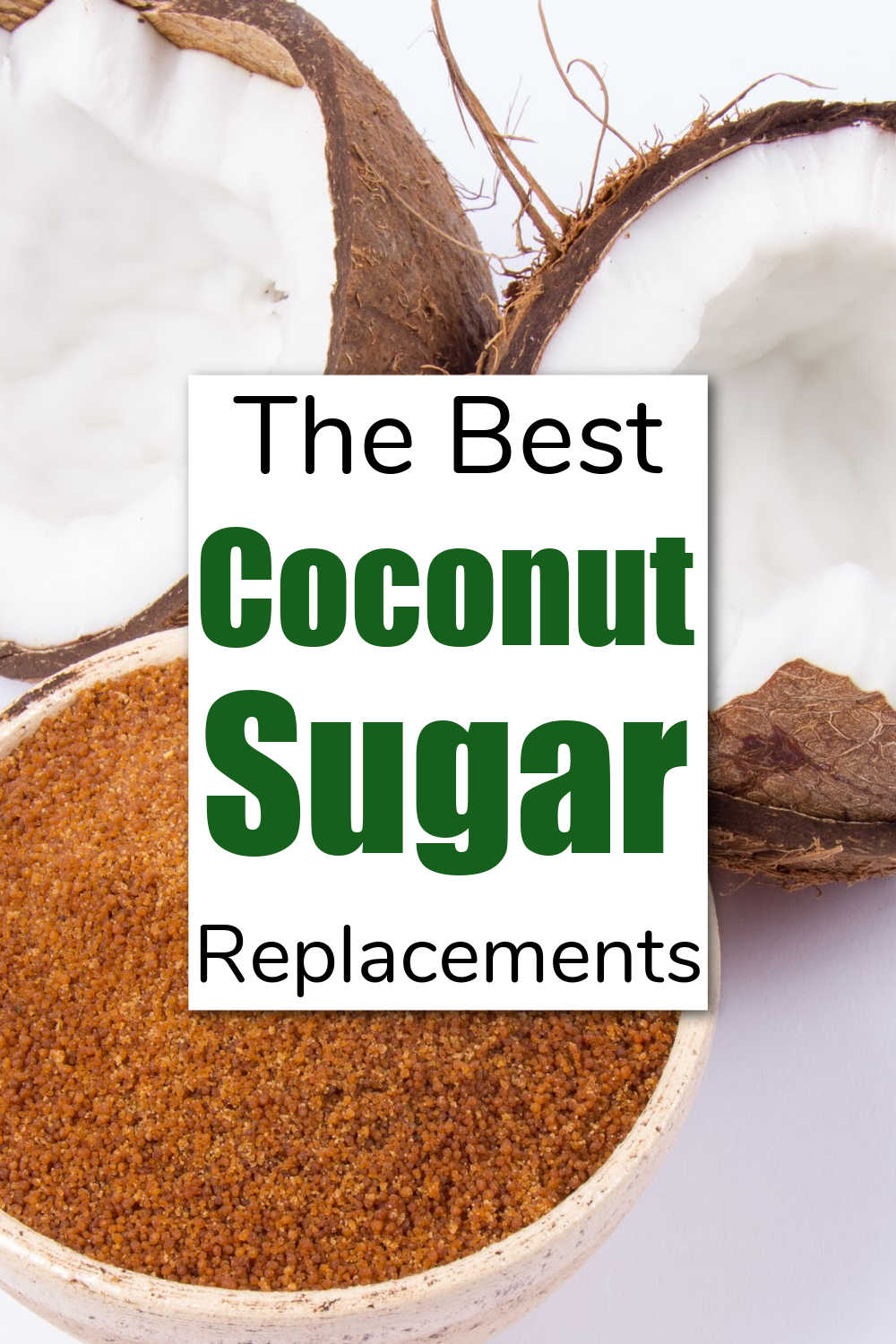